Brexit is a threat to UK-Irish relations, says British ambassador 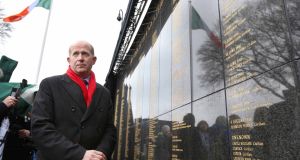 Britain exiting the European Union would reduce the contact between Irish and British politicians and officials that takes place in Brussels and would create a risk of old suspicions re-entering the relationship between the two countries, the British ambassador, Dominick Chilcott, has warned.

He said he believed one of the reasons relationships between Ireland and the UK had improved so hugely over the past 40 years was the fact that ministers and government officials from both countries met regularly and formed alliances on EU business in Brussels.

“Before 1973, the British and Irish governments barely spoke to each other, barely saw one another – the first visit to Ireland by a serving British prime minister only happened in autumn 1973 after we both joined the EEC.

“My fear for this relationship is that without seeing each other regularly in Brussels every working day and week and month, we would drift apart and there would be a risk, perhaps, of some of the old kind of wariness and suspicions that can poison a relationship creeping back in.”

Mr Chilcott said Ireland and the UK did not always “see eye to eye” on every issue that arose within the EU, but the two countries approached many things in a similar way and “we have become very good friends and very good allies and supporters of one another within Europe”.

Speaking at University College Cork where he addressed a conference organised by the European Movement Ireland on the UK’s EU referendum, Mr Chilcott also cautioned he could see “a hardening” of the Border if the UK voted to leave the EU.

Even if the UK were to develop a special trading relationship with the EU upon Brexit, such a relationship would almost certainly involve some sort of customs control to ensure products met EU standards and rules on the origin of products, which would make Anglo-Irish trade more complicated, he said.

Sustaining a common travel area between Ireland and the UK would also become more difficult as those coming from Central Europe and Mediterranean countries could seek to enter the UK by coming first to Ireland and then simply catching a ferry from Dublin to Holyhead or Liverpool.

“You could have border controls and border posts in a common travel area between the Republic and the UK and that presents the awful prospect of the Border hardening between Newry and Dundalk which would be a tremendously regressive step.”

Such a development would be completely at odds with “the strategic direction of travel of the governments in London and Dublin”, said Mr Chilcott, stressing he was not advocating how people should vote but was simply highlighting the issues involved.

Earlier, Noelle O’Connor of the European Movement Ireland urged Irish people with relatives and friends in the UK to alert them to the issues and encourage them to register so that they can vote on whether the UK remains in or exits the European Union on June 23rd.