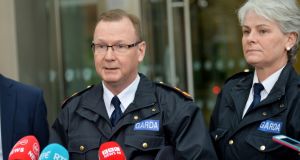 A group of schoolchildren in burgundy jumpers, grey trousers and kilts milled around the ground floor of the Central Criminal Court on Tuesday morning, chatting, laughing, schoolbags swinging from their shoulders.

Two floors up and a universe apart, two children of roughly the same age sat quietly with their families behind the closed doors of Court 9.

Boy A and Boy B, as they have been known throughout the trial, were there to hear the sentence that would be handed down to them for the murder of another child, Ana Kriégel.

Two children, waiting to be sentenced for the murder of another child. There is little by way of legal precedent, and no preparation for us a society, for something like this. Only twice before in modern times have children in Ireland been found guilty of murder, Mr Justice Paul McDermott said, as he delivered sentencing on Tuesday. Boy A and Boy B are the youngest people in the history of the State to be convicted of murder.

The enormity of the task before him, and the extent of the devastation suffered by the families in his court – Ana Kriégel’s most of all – was reflected at times in the judge’s demeanour and the length of the judgment, which continued for one hour and 45 minutes. At one point towards the end, he paused, took off his glasses and rubbed his face. When he spoke again, his voice was lower.

There was a sense throughout much of the trial for her murder that Ana’s own voice had not been heard. That changed last week, when she was brought vividly into the heart of proceedings in her mother Geraldine’s victim impact statement. And the judge again put her at the centre of his remarks in court on Tuesday. “Anastasia Kriégel’s life is and was of supreme importance,” he said at the outset.

She was “a lovely and loving child within a loving family”.

Turning to her parents, he said: “There is no solace for them in this process. Ana’s murder has resulted in a sentence which is lifelong. The death of a child and the manner in which it occurred has caused them deep misery and the destruction of their lives.”

Even the longest sentence would end at some point, whereas the suffering of the deceased victim’s family would be permanent, he said.

Geraldine and Patric Kriégel, accompanied by five supporters, sat to one side during the sentencing. They were calm and perhaps more at ease than they had been during the trial, as Geraldine made notes throughout the proceedings in an A4 notebook.

Boy A was accompanied to court by his parents and both grandfathers. Boy B’s father, who had been absent from the sentencing hearing on October 29th, was back in court, along with the boy’s mother and two other family members.

The reaction to the sentences, when they finally came, was muted. Boy A was given a life sentence, with a review after 12 years, for murder, and a concurrent sentence of 12 years for aggravated sexual assault. His mother began to weep quietly. He clutched her arm.

For Boy B, the sentence was 15 years, with a review after eight. Boy B’s father rubbed his son’s shoulder as it was delivered. The boys rarely looked up, and never at one another.

These are boys who, the evidence in the trial had suggested and Mr Justice McDermott noted again on Tuesday, were remarkable before May 14th, 2018, for their apparent ordinariness.

Boy A, his grandfather previously said, was a loved and loving boy, with a passion for drawing and model-making. Boy B, the court heard during the trial, still liked Transformers and playing with Pokémon cards, and he had a striking intelligence. Both boys came from stable, law-abiding, loving and socially engaged homes, the judge said.

It was a murder that happened in “a normal, well-established urban community, on a normal sunny May afternoon on a normal working day”, carried out by two boys who, the court heard, showed no evidence of depression, mental illness or psychotic disorder; no evidence of risk-taking behaviour or poor impulse control; no factors in their social or family backgrounds; no difficulties with authority.

There was, it seemed, no explanation, no sense to be made of it at all.

Addressing the boys directly at the very end of the hearing, the judge said: “You will both have to carry the guilt and shame of your involvement in, and responsibility for, her death for the rest of your lives.”

But Ana’s family must bear their grief for the rest of their lives, while the two boys would “be given the chance to reconstruct [theirs] in a positive way”. He paused before he addressed them directly. “I hope you take it.”

“You will have the opportunity for a future, a second chance – something of which you so wrongfully and cruelly deprived Ana Kriégel.”

Standing outside the court afterwards, Ana Kriégel’s parents gave a short, dignified statement that was steeped in pain. Her father said: “Forever is not long enough. Please remember Ana and keep her in your hearts, somewhere.”

Expressing “extreme gratitude”, Geraldine Kriégel paid tribute to Det Insp Mark O’Neill, who had led the murder investigation, and to liaison officer Sgt Siobhán McIntyre “for holding the family up through all this pain”.

And she thanked the media for its understanding during the tragedy, “our family, our friends and our neighbours, and thank you to all the wonderful people out there who supported us and kept us going”.

After they left and a brief Garda press conference had ended, the family of Boy B came quietly out the same door, unnoticed by passersby and the few remaining members of the media. They hurried away in the opposite direction, their own grief and disbelief etched across their faces.