Staff work out that with current charges a fine would be almost €1,000 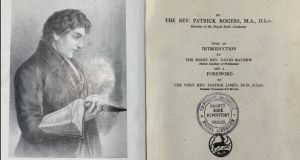 A book that was almost 20,000 days overdue has been returned to Thurles library in Co Tipperary. Librarian John O’Gorman said the biography of Fr Theobald Matthew by Rev Patrick Rogers, was returned earlier this week.

“A gentleman walked in on Tuesday evening with this well thumbed, faded copy of Rev Rogers’ biography under his arm. He informed us that although he himself had not borrowed the book, he had been clearing out the house and found a stack of books, went through them and discovered that one of them was a long way from home.

“So he decided to return it to us in Thurles library,” Mr O’Gorman told RTÉ’s Morning Ireland.

An overdue was returned to Thurles Library last evening.

But if they pay €950 we'll say no more about it 'coz we're sound like that... pic.twitter.com/aeUhBQR6d1

The librarian said that while fines are being phased out, library staff had worked it out that at 5c a day, which is the current overdue charge, a fine would be somewhere in the region of €970.

He pointed out that under the new national library strategy, one of the headline points is the phasing out of library fines. “It has been found that the threat of a fine hanging over a borrower is counter productive and it keeps more people away from our public library system than it brings in, we’re all about trying to attract the community back to the library service.”

Usually a book like this would go back to a central store, but this volume has gained some bit of fame and notoriety, said Mr O’Gorman “so we may have to do something more special. It will get a shelf of its own”.

“One of the reasons why we publicised this is, as people have noticed from our social media posts, is we’ve taken a lighthearted approach. We’re actually coming up with a fantastical figure to just poke fun at our charges, that although your book may be weeks or years overdue, they’re always very welcome back at the library as are their borrowers - you’ll be welcome with open arms and you won’t need your cheque book.