Beyond Brexit: future looks uncertain for Ireland on many fronts 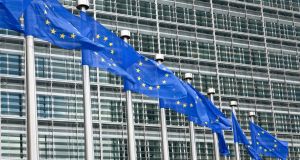 The decision by Britain to leave the EU has thrown up enormous challenges for Ireland. Of all EU member states Ireland is the country most economically exposed to Britain’s imminent departure. Photograph: Walter Zerla/Getty Images

On January 22nd, 1972, the then Irish taoiseach Jack Lynch and British prime minister Edward Heath stood side by side in the grand surroundings of the Palais d’Egmont in Brussels.

Both men were present to sign the accession treaty of their respective countries to the European Economic Community (EEC), paving the way for a new phase in their countries’ history.

For Ireland and Britain, the path towards EU membership had been intimately connected.

Ireland’s economic dependency on its former colonial power in the years following independence meant its accession to the European Union had become all but inevitable once Britain joined.

Taoiseach Seán Lemass followed Harold Macmillan in applying to join the EEC in 1961, a move that was rebuffed by a “non” from Charles de Gaulle.

In 1967 both countries reapplied, and were accepted, joining the EEC, along with Denmark, on January 1st, 1973.

But in more fundamental ways the attitude of both countries towards EU membership was very different.

Britain from the outset was a reluctant partner. Its membership was seen by many as an uncomfortable exigency, an inevitable but unpalatable step for a world power that needed to find a place in the economic and political order of a post-Imperial world.

For Ireland, it offered an opportunity. EU membership marked a turning point in Ireland’s socio-economic history, a coming-of-age for a country that was struggling to shed its economic dependency on the power that ruled it for centuries.

Half a century after the Irish Free State was established, the Republic was still heavily dependent on Britain for trade, its currency pegged to sterling.

EU membership offered a small nation such as Ireland its first stab at multilateral participation, an opportunity to be part of a bigger political community, and take its seat around the EU table as an equal with Britain.

One retired diplomat – one of the first batch of Irish civil servants to work in Brussels in the early 1970s – recently recalled to me his mother’s pride when he was appointed to represent Ireland in Europe.

A staunch Irish republican, she was immensely gratified by the fact that her son was representing his country abroad, a signal to her of how far Ireland had come as a mature, sovereign nation.

Ireland, to quote the infamous words of Robert Emmett, was finally taking its place among the nations of the earth.

Some 43 years later, that unique relationship of mutual interdependency is under threat. The decision by Britain to leave the EU has thrown up enormous challenges for Ireland.

Of all EU member states Ireland is the country most economically exposed to Britain’s imminent departure.

Up to 16 per cent of Ireland’s exported goods go to Britain, by far the highest percentage of any European country.The agrifood sector and indigenous firms are particularly dependent, with almost half of Ireland’s food exports going to the UK.

Similarly, about 20 per cent of Ireland’s international trade in services is UK-dependent. In all, approximately €1.2 billion of goods and services are traded each week between the two countries, with an estimated 400,000 jobs directly supported by the bilateral trade relationship.

The fact that Britain will now have a new frontier with the EU, running across the northern half of the island of Ireland raises hugely complex issues in terms of free movement of goods and people.

Recent indications from the Conservative government that Britain will prioritise immigration over access to the single market, coupled with suggestions from Brexit minister David Davis that Britain will exit the customs union, makes the prospect of border checks more likely.

While there is widespread political sympathy across Europe for the geo-political specificities of the Northern Ireland situation, there is no easy solution to the Border issue, not least due to unionist sensitivities over the possibility of imposing checks at ports and airports in Northern Ireland rather than at the internal Irish Border.

But as well as the myriad of challenges facing the Anglo-Irish relationship in the wake of Brexit, the departure of Britain from the EU will also have a profound impact on the way Ireland conducts its affairs in Brussels.

Since the accession of Ireland and Britain to the EEC in 1973 the two countries have been closely aligned around the EU table. As open, economically-liberal member states, Ireland and Britain have traditionally found themselves on the same side of the debate on matters of trade, regulation and financial services legislation, part of a wider free-trade bloc of countries including the Netherlands, Scandinavian countries, Belgium and Luxembourg.

In the last few years, Ireland and Britain have both been strong advocates of the EU-US trade deal and the Comprehensive Economic and Trade Agreement between the EU and Canada, as well as moves to develop the single market in goods and services, particularly in the emerging digital space.

Similarly in financial services, the close interdependency of Ireland’s financial services industry and associated businesses with the City of London – much of the activity in Ireland’s IFSC district in Dublin offers “back office” functions to banks and financial institutions in London – has seen Ireland back Britain in opposing EU rules seeking to enhance EU regulatory powers over financial services, such as proposed changes to money-market funds.

On tax, Britain is a close supporter of Ireland’s insistence on tax sovereignty, favouring an international, OECD approach to tax rules rather than an EU approach often pushed by France and Germany.

Britain’s withdrawal from the EU will also have an impact operationally on Ireland.

Like all EU member states, Britain and Ireland have a permanent presence of government officials based at their Permanent Representations to the EU, comprising a mixture of diplomats and seconded officials from government departments such as finance, agriculture, trade and justice.

Ireland is already beefing up its core group of 85 officials in the wake of the British referendum result.

Because both countries operate a common law system, Ireland and Britain have traditionally worked closely together on EU proposals and processes, with the Irish bureaucracy benefitting from Britain’s larger representation and more substantial support structures in London.

Many EU proposals and regulations, designed with the continental legal model in mind, have to be checked for compliance with British and Irish legal systems. This is particularly the case in the area of justice and home affairs, where both countries have an opt-out stretching back from the 1990s.

The Irish-British dynamic within the EU is not solely mutually enforcing, however. As independent countries they have taken divergent paths in certain EU policy areas. Most notably this is the case in agriculture where Ireland has tended to align itself with France as a strong supporter of the Common Agricultural Policy (CAP), in contrast to Britain which has opposed the level of subsidies afforded to the sector.

Similarly, Ireland has until recently been a net recipient of EU funding rather than a net contributor like Britain, giving the smaller country a very different perspective on the question of cohesion and structural funds and the EU budget.

The divergence is most profound in terms of economic policy following the decision by Ireland to adopt the single currency in 1999. As one of the 19 members of the euro area, Ireland is bound by stricter European oversight on budgets and fiscal rules, while its Minister for Finance participates in the regular eurogroup meetings of finance ministers which is closed to non-euro members.

As the implications of the British referendum vote on Ireland begin to sink in, it is becoming increasingly evident that Ireland’s decision to join the single currency without Britain was one of the most significant policy decisions taken by the Irish State since accession.

Even if Ireland wanted to, leaving the EU would not be a viable option for the country given that its currency is now embedded in a pan-European currency system rooted in Frankfurt.

As Ireland looks ahead to the next phase of its EU membership, the future looks uncertain without Britain.

The prospect of tariffs on exports is forcing Irish producers to diversify their customer base and look further afield for export opportunities. The departure of a traditional ally will spur Ireland to forge new partnerships and friendships, perhaps with like-minded smaller countries like Estonia or the Czech Republic.

Already since the British vote, Ireland’s traditional loyalty to the EU project has come under pressure by the decision of the European Commission’s competition division to order Ireland to recoup up to €13 billion in unpaid taxes from US tech company Apple.

The prospect of further EU clampdowns on the tax arrangements of individual member states is hugely concerning for Ireland given its dependence on the US for foreign direct investment.

A priority for Ireland in the coming decades will be ensuring that the EU remains an outward-looking trading bloc as it adapts to life without one of its biggest economic powers and strongest advocates of free trade.

As a small country on the edge of Europe, negotiating the balance between Britain, the US and Europe will be a key strategic challenge for Ireland in the years ahead.