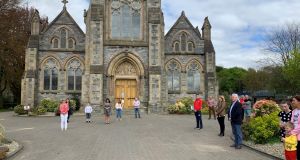 Family and friends pay tribute as bells rang out at the Church of the Immaculate Conception, Strabane, Co Tyrone, in memory of local nurse Pat McManus, who died with Covid-19. 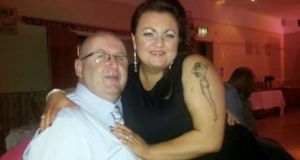 Pat McManus, a Strabane-born nurse who died in England, pictured with his niece Aileen Mullen.

First a single bell rang out. Then, from the church a few hundred metres away, there was another. They were joined by another, and then another, as Strabane remembered Pat McManus.

Originally from the Co Tyrone town, the 60-year-old had spent decades working as a nurse in Staffordshire in England. When the coronavirus pandemic spread to the UK, he chose to return to front-line nursing despite underlying health conditions. He contracted the virus, and died a week ago.

He is believed to be the first healthcare professional from Northern Ireland to have died of coronavirus contracted as a result of their work.

“He knew what he was doing,” said his niece, Aileen Mullen. “He said, ‘that’s where I’m needed.’

“We’re a small family, we’re very close, and we’re just devastated. He was the head of the family and now he’s gone - I don’t know how we’ll ever get over it.

Mullen was one of about 50 relatives, friends and well-wishers who gathered outside the church of the Immaculate Conception in the Co Tyrone town on Sunday afternoon as the bells were rung in her uncle’s memory.

Sixty years ago, Mr McManus had been baptised in this same church. Now, parish priest Fr Declan Boland said, he had given his life for others.

“In spite of his underlying health condition he strove to do his utmost, and he died in that cause, which is the utmost Christian sacrifice,” said Fr Boland.

The bells, he said, would ring out now just in Mr McManus’ memory, but in a message of support and solidarity with every healthcare worker.

“It’s interdenominational, it’s all groupings, as a mark of affection and esteem for the amazing people who at this moment in time are doing so much for others, particularly in the medical field but right across the board,” said Fr Boland.

“It gives us the opportunity to remember all those in all parts, those countless thousands and thousands of men and women on the front service line who are now risking their lives to help people.”

Among those other denominations taking part was Reverend John White, the Church of Ireland rector at Christ Church, Strabane. “As it has often been said, this disease makes no distinction,” he said.

Raymond Barr agreed. An independent councillor in Strabane, he came up with the idea of ringing the bells in order to let local people pay their respects.

“People in Strabane felt for him and felt for his family and we needed some way to physically show that.

“It’s also for everybody in the district who has lost someone over the last five weeks. They haven’t been afforded the opportunity to give them the send-off that we traditionally would, and that must be a horrendous feeling for them, so hopefully this was a source of comfort.”

As the sound of the bells faded, those in the chapel grounds began to clap. For Mullen, it was an emotional moment.

“I’ve never known this to happen before, and even though Pat’s been out of the town for years, the fact that the town all came together for this is really overwhelming.”

For Fr Boland, it was also an act of hope. “The bell rings for funerals, it rings to call people to church, it rings for weddings, so the bell as well as being a time of sadness it’s a time of hope, it’s the sound of optimism because all people can hear it and all people will be able to identify with it.

“Even though they might never have heard of Pat McManus they can be in solidarity with all of those who at this moment are fighting so hard for the lives of so many people and are doing us an amazing service,” he said.

1 Maureen Dowd: Biden has his limitations but he’s no Trump
2 US passengers fly into Dublin: ‘I’m here for six days. I guess I’ll have to stay inside’
3 Quarantine process to be tightened as health officials grow nervous
4 Covid-19: Restrictions on travelling abroad may last several years, expert warns
5 Stunning image of comet Neowise captured over Dublin Bay
Real news has value SUBSCRIBE