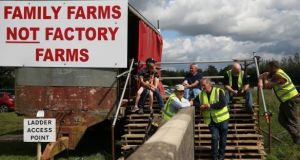 A file image of farmers protesting outside the Dawn Meats plant at Grannagh on the Waterford/ Kilkenny border. Photograph: PA.

The group representing meat processors has said it is agreeing to enter talks to resolve the ongoing beef dispute despite “illegal blockades” still being in place at meat plants.

Cormac Healy of MII said the organisation had responded to Mr Creed’s call for talks to take place and it would participate constructively in an attempt to find a resolution to a dispute which has now being going on for four weeks.

On Tuesday, MII said some 3,000 staff working at processing plants had been temporarily laid off “due to the continuing illegal blockades of factories and intimidation of staff and suppliers by protestors”.

The one-on-one sessions with Mr Creed will be followed by a plenary session involving all of the parties later on Saturday.

In a statement issued before talks began, Mr Creed said it was time for all parties involved to “take a step back from entrenched positions and to take a positive approach towards resolving their differences”.

He maintained that he had a “deep understanding of the outstanding issues and the emotions involved” and encouraged both sides to recognise the urgency of the current situation.

The talks were due to have taken place last Monday, but began to unravel when MII pulled out because of the ongoing demonstrations by farmers. It has now agreed to resume talks citing progress made in the last 24 hours.

IFA national livestock committee chairman Angus Woods called on Mr Creed to include Supermac’s owner Pat McDonagh in the talks. Mr McDonagh has been vocal in support for beef farmers, saying that they are not being paid enough for their cattle.

He has pointed out that while the price that farmers are being paid has decreased, there has been no reduction in the price Supermacs pays for its beef.

Mr Woods suggested Supermac’s was paying less for processed beef than many farmers were getting for their cattle at between €3 and €3.50 a kilo.

“Irish buyers of Irish beef could pay more and still retain very high levels of profitability in their own businesses.

“Pat McDonagh and the other leading players from the food services sector should be invited in to talks to explain the price they are buying their beef at and whether or not this is reasonable and should be increased.”