Over 500 vikings take part in the Battle of Clontarf re-enactement in St. Anne's Park, Raheny. The Festival is running from the 18th-19th of April, and is expected to have over 40,000 visitors. Video:Daniel O'Connor 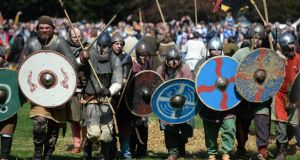 More than 500 Vikings and Irish army men descend on St Anne’s Park, Raheny this Easter Weekend for the largest ever Irish battle re-enactment at at the Battle of Clontarf Festival. Photograph: Dara Mac Dónaill / The Irish Times

Around 40,000 spectators turned out to watch a re-enactment of the Battle of Clontarf in Dublin today.

More than 500 people in costume re-created the historic clash between Viking and Irish armies at St Anne’s Park in Raheney, to honour the millennium anniversary of the famous battle which resulted in a defeat for the Vikings and the death of Brian Boru.

The fine weather swelled visitor numbers to twice the figure anticipated by the festival’s organisers, a spokeswoman for Dublin City Council said this evening.

The re-enactments, the largest ever to take place in Ireland, are being held today and tomorrow close to the original battle site.

The two-day Battle of Clontarf Festival also includes a medieval village with over 80 tents, skills and weapons demonstrations, a mounted display on horses, a Viking longboat, falconry, archery, food and music.

Visitors are also welcome to participate in the creation of a giant tapestry on a loom, to make their own Viking or Gaelic flags, swords and shields, or create a labyrinth from Irish willow.

The festival continues tomorrow from 11am to 7pm. brianborumillennium.ie