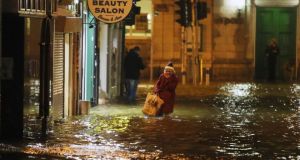 A woman walks through flood water in Cork city last week. The city is considering a plan to spend up to €100 million on measures including erecting up to 12km of protective barriers on the city’s quays. Photograph: PA Wire

A major flood relief scheme for Cork costing up to €100 million and aimed at preventing a repeat of this week’s severe flooding in the city will consist of a number of measures including erecting up to 12km of protective barriers on the city’s quays, a conference has heard.

John Martin, programme manager with the national catchment flood-risk assessment and management programme at the Office of Public Works, said the preferred option in the Lower Lee Flood Relief Scheme (LLFRS), to be finalised in July, was likely to rely heavily on flood defences.

Mr Martin told a flood risk management conference in Cork that the scheme would involve the construction of flood barriers on both channels of the river Lee, erecting permanent solid structures where there were railings and sealing gaps in existing quay walls.

Sealing walls
The project, which all going to plan could be completed by 2018, would also involve sealing older quay walls so that there is no seepage up under the barriers. It would also involve installing valves to prevent flood waters entering drains and sewers under the city centre.

Mr Martin said the LLFRS had also looked at dredging but dredging would bring negligible benefits in terms of coping with tidal flooding, while the river was not prone to huge sedimentation and was already reasonably efficient in terms of managing downstream flows.

The use of reservoirs to attenuate river or fluvial flooding is also being considered.