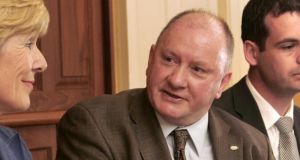 National Union of Journalists Irish secretary Séamus Dooley has written to the Broadcasting Authority of Ireland to say a recent decision to uphold a complaint against RTÉ Radio One’s Mooney Show following a discussion on civil partnership was “inimical to the public interest”.

The National Union of Journalists (NUJ) has written to the Broadcasting Authority of Ireland (BAI) to say a recent decision to uphold a complaint against RTÉ Radio One’s Mooney Show following a discussion on civil partnership was “inimical to the public interest”.

The complaint from the Family and Media Association, which promotes Catholic family values in the media, related to a broadcast on January 20th, when former RTÉ news reader Michael Murphy was on the show with host Derek Mooney and Tiernan Brady from the Gay and Lesbian Equality Network.

The association maintained that no opposing voice to same-sex marriage was heard during the broadcast.

The BAI compliance committee upheld the complaint, and the NUJ Irish secretary Séamus Dooley has written to chief executive of the organisation Michael O’Keeffe

“The requirement of fairness, objectivity and balance has now been interpreted to mean that broadcasters are required to seek out alternative views in a range of programme settings,” he said.

“Any matter ‘of current public debate’ - to quote the phrase used in the BAI note - is apparently deemed so sensitive that researchers, producers and presenters have to make contingency provision for the expression of a counter-opinion in all settings.

“This represents an extension of the guidelines in respect of coverage of referenda beyond the period of the referendum campaign in a manner which is inimical to the public interest.”