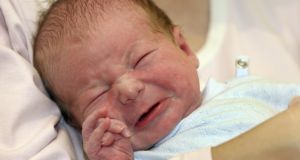 Ireland’s baby boom saw 63,900 live births recorded during 2016, a rate of 13.5 births for every 1,000 of the population. Photograph: Getty Images/iStockphoto

The figures from the EU statistics agency Eurostat estimate that there were 30,400 deaths recorded in the State last year (6.4 per 1,000), the joint lowest along with Cyprus.

The study says Ireland (at 7.1) had the biggest “natural rise” in population in the EU last year, a figure which excludes the rate of migration into and out of countries. Cyprus (4.7) had the second-largest increase.

The country with the lowest birth rate was Italy, with 7.8 children born per 1,000 people. Other southern European countries also recorded low birth rates: Portugal had a rate of 8.4 per 1,000 behind Greece ( 8.6) and Spain (8.7).

In terms of overall increase in population Luxembourg, Malta, Ireland and Lithuania saw the largest rates of population increases in the last year.

Luxembourg had the biggest rate of population increase at 19.8, followed by Sweden with 14.5.

Germany still has the largest population in the EU, at 82 million people, followed by France (67 million) and the UK (65 million).