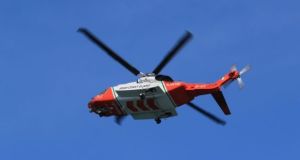 Minister for Transport Shane Ross is appointing an international team of aviation experts to review “oversight” of the State’s air-sea search and rescue provision.

Mr Ross, who holds responsibility for the Irish Coast Guard, is acting on an Air Accident Investigation Unit (AAIU) interim recommendation made to him after the fatal Rescue 116 helicopter crash.

The team led by a former European Aviation Safety Agency rulemaking director Prof Jules Kneepkens is being given two months to report back.

The bodies of Capt Fitzpatrick and Capt Duffy were recovered, but the two winch crew remain missing.

The AAIU is still investigating causes, but its interim statement published just over two months ago called on Mr Ross to conduct a “thorough” review of search and rescue aviation operations in the State. It said this was required to ensure “effective continuous, comprehensive and independent oversight”.

The interim statement also recommended that CHC Ireland – the air crew’s employer – should review its safety management systems, which the investigators expressed concern about.

A third interim recommendation, for helicopter manufacturer Sikorsky, related to a software issue in data recording, which is not directly relevant to the cause of this crash.

A number of other coastguards have also offered to assist in the review, according to Mr Ross.

The Minister said that Prof Kneepkens, who is also a former director-general of civil aviation in Belgium and the Netherlands, brings “vast experience in the international regulatory field”.

The blend of search and rescue operational and international civil aviation audit expertise in his team “should ensure the review meets the requirements of the AAIU’s recommendation”, Mr Ross said.

The terms of reference will “take account of the various findings made in the AAIU’s interim statement in relation to oversight”, and will examine “practices and procedures within the various entities involved in search and rescue aviation oversight,” Mr Ross said.

“It will also identify any gaps or lack of clarity in terms of roles, legal vires, processes, training, resources and/or personnel within these organisations to carry out their oversight,” he said.

The team is expected to make recommendations on practical measures to address these.

This should ensure oversight arrangements “measure up to international best practice in terms of effectiveness, continuity, comprehensiveness and independence,” he said.

Mr Ross said the independent team would enable him to report “good progress” to the AAIU by mid-June, which is the “next reporting milestone” for the various safety recommendations in the continuing investigation into the crash.

“I am confident that we will have a final report by end of July which can chart a way forward for search and rescue oversight in Ireland,” he said.

The AAIU final report is expected to take some months, while a separate joint investigation is also being conducted by the Garda and Health and Safety Authority.