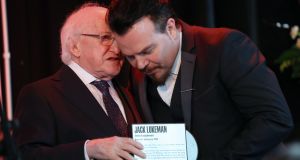 President Michael D Higgins chats with singer Jack L at the unveiling of a plaque for Leonard Cohen in Athy. Photograph: Laura Hutton

Songwriter and musician Leonard Cohen worked with the Athy writer John McKenna on a requiem, Between Your Love and Mine, signing off on the final draft just a few weeks before he died in late 2016.

Describing Mr Cohen as one of the finest examples of the poet-songwriter in the history of contemporary music, President Michael D Higgins unveiled a plaque in honour of the late artist at the Community Arts Centre in the Co Kildare town on Thursday.

“Leonard Cohen is an artist who has left a profound footprint on our musical landscape and on the tradition of song,” the President said, adding that his lyrics captured the “very essence” of human life and the human condition.

“Despite his melancholic lyrics and sombre vocal delivery as some would say, Leonard Cohen remained an idealist and even a self-confessed closet optimist, believing in the power of an ethical, enlightened and progressive society.”

The plaque is the latest in the Made in Athy series, which seeks to honour the connections that well-known figures such as Johnny Cash, Neil Hannon and The Smiths’ Johnny Marr have with the Kildare town.

Mr Higgins commended those behind the Athy initiative for a plaque which he said is a fitting tribute to the man.

“Made in Athy has made such a good decision in reminding [us] of how music is profoundly interwoven with the fabric of Irish life, and has been since the very dawn of culture,” he said.

“There is no doubt that Leonard Cohen has left a special and truly lasting legacy and his large body of poetry, songs and prose will continue to inspire current and future generations. It is fitting and correct that we should honour this great man of words.”