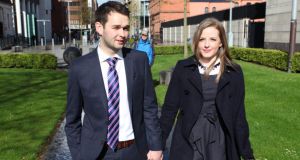 Daniel and Amy McArthur of the Ashers Baking Company. The company was found guilty of discrimination against a gay rights advocate by refusing to bake him a cake with a slogan promoting same-sex marriage. Photograph: Stephen Kilkenny/PA Wire

The Ashers Baking Company in Belfast is to appeal the Belfast County Court decision which found it guilty of discrimination against a gay rights advocate by refusing to bake him a cake with a slogan promoting same-sex marriage.

The McArthur family in a statement said it will challenge the ruling in the so-called gay cake case where the bakery was ordered to pay £500 in compensation to Gareth Lee who with the North’s Equality Commission took the case against Ashers.

Ashers, which has six shops in the greater Belfast area, was prosecuted for refusing to bake a cake with the message “Support Gay Marriage” and featuring the Sesame Street characters with their arms around one another.

“After much careful and prayerful consideration given to legal advice, we have decided to appeal the judgment handed down,” the McArthurs said in a statement issued through the British Christian Institute.

“We continue to insist that we have done nothing wrong as we have discriminated against no individual but rather acted according to what the Bible teaches regarding marriage,” they said.

“As many other people have already noted, Christian beliefs seem to have been trampled over in this judgment and we believe this only has negative effects for our society,” said the family.

“Our hope and prayer would be that an appeal will allow us and other Christians to live out their faith in Jesus Christ in every part of their lives, including their workplace.”

The case was taken against Ashers after one of its shops accepted the order for the cake with the “support same marriage” message but subsequently declined the order on the basis that it was against its Christian beliefs.

Mr Lee took the successful case against Ashers which is owned by Colin and Karen McArthur. Their son Daniel is managing director of the company.

The Christian Institute is funding the family’s legal costs which currently are estimated to be at least £39,000 (€54,600)and possibly more.

“I believe that most people think that this is a ruling that should be overturned,” said Simon Calvert of The Christian Institute. He said they would support the family as far as Europe if that was required. He said “huge numbers” of people were donating money to the institute to help the funding of the case.

“There has been such extraordinary support from people from all walks of life who are appalled by what has happened to the McArthur family. There is huge public support for an appeal and it is vitally important that the higher courts consider this issue,” said Mr Calvert.

“This court decision will have dramatic consequences if it goes unchallenged,” he said. “The leading human rights QC, Aidan O’Neill, has already spelled out what is possible as a result of the judge ruling against Ashers. Muslim printers could be sued for refusing to print cartoons of Mohammed, and a Christian film company could be sued for refusing to produce a pornographic film.”

Mr Calvert said that the people of Northern Ireland were very clear on the issue. He said, “A ComRes poll in March 2015 found that 90 per cent of NI voters say equality laws ‘should be used to protect people from discrimination and not to force people to say something they oppose’.”

He continued, “In the same poll, nearly four out of five (79 per cent) believe a Muslim printer should not be taken to court for refusing to print cartoons of Mohammed. And almost three quarters (74 per cent) believe a printing company run by Roman Catholics should not be forced by legal action to produce adverts calling for abortion to be legalised. But this is what awaits us if this judgment is allowed to stand.”