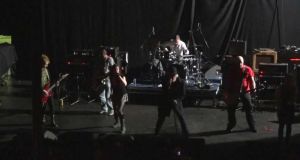 The possibility of music venues reopening for events if they did not serve alcohol has been raised.

Arts campaigners have said they are “hopeful” socially distanced music events and gigs will be able to be held in the near future, following a meeting with Ministers and senior public health officials on Monday.

Angela Dorgan, chair of the National Campaign for the Arts (NCFA) group, said officials’ main concerns were around people congregating while travelling to venues or in queues outside.

Ms Dorgan said the campaign group had been informed there would likely be no changes to limits on gatherings until September 13th. Current restrictions in place until then limit indoor gatherings to six people, and 15 people outdoors.

Venues deemed “controlled environments”, such as museums, cinemas, theatres and art galleries can allow a maximum of 50 people to congregate indoors, as can weddings.

Ms Dorgan said the arts sector had been asked to come up with “solutions” that would allow music gigs or similar indoor events take place, while adhering to social distancing requirements.

Ms Dorgan said she would be “hopeful” music gigs could go ahead again in the coming weeks. “I am far more confident now than I was before this morning’s meeting,” she said.

The arts sector would be capable of running music events and gigs while ensuring attendees adhered to social distancing, she said. At the meeting, public health officials expressed reservations around people congregating while travelling to venues or while queuing outside, she said.

The possibility of music venues reopening for events if they did not serve alcohol was raised at the meeting, she said.

“People going to gigs would be something people would love to do. I don’t think you would need to drink, people know this is not normal times,” she said.

However, as many venues relied on bar takings to break even and pay staff, artists and promoters, the sector would need some financial “stimulus” if it was permitted to reopen but not serve alcohol at events, she said.

Ms Martin described the meeting as “very positive and productive”. She said it was agreed that the NCFA and the Arts Council could provide input to health authorities in charting the way forward for a return to safe performances and activities.

“We understand the importance of the arts community getting back to earning a living and doing what they love, for the benefit of all society,” she said.

The NCFA and the Arts Council will meet department officials later this week for further engagement.

The Minister said she intended to establish a dedicated taskforce for the arts and culture sector in the coming week and would announce details of support packages arising out of the July stimulus package shortly.

Government sources also confirmed the meeting discussed “taking alcohol out of the picture” as one potential option to make it easier to broaden the scope for cultural events to take place, but cautioned that no decision and no formal plan was agreed. Similar restrictions on the sale of alcohol at public events, including some sporting occasions, could be seen as precedents for such a step, sources said.