AP McCoy back in the saddle for Co Antrim donkey derby 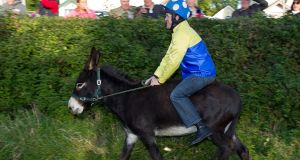 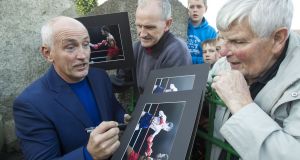 Twenty time champion jockey AP McCoy made a shock return to the racing world on Saturday night but was beaten by boxing champ Barry McGuigan who triumphed in a chaotic donkey derby.

The Grand National winner’s famed horsemanship counted for nothing when his mule steered him into a hedge during a charity event in his hometown of Moneyglass, Co Antrim.

“They are as stubborn as they say they are,” McCoy said after managing to cling on to his mount to stagger home in third place.

“I suppose I’ve ridden a few donkeys in my time — the thing was they weren’t supposed to be donkeys.”

The fun race was part of a day of events to mark McCoy’s extraordinary sporting career and raise money for local charities, including the Northern Ireland Children’s Hospice.

Hundreds of supporters laughed, cheered and screamed as the donkeys hurtled round one circuit of a field behind the pub run by the McCoy family.

Among them was current world super bantamweight champion boxer Carl Frampton, who steered clear of the asses for fear of injury.

That worked out well for McGuigan — Frampton’s promoter — as it was one fewer competitor between him and the title.

“I daren’t look behind me because I was so unstable on the poor donkey,” McGuigan said after lifting the trophy.

“I think mine was just a bit fitter than everyone else’s.”

1 Healthy one day, ventilated the next – a Covid-19 survivor’s story
2 The FinCEN files: The billion dollar a month money trail
3 Coronavirus: 396 more cases as public is urged to help protect ‘older and vulnerable’
4 Gardaí break up rave attended by 60 people at Dublin flat complex
5 The far right rises: Its growth as a political force in Ireland
Real news has value SUBSCRIBE