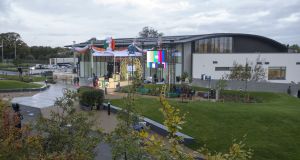 The former Victory Centre in Firhouse, now a Church of Scientology “Ideal Org” base in Ireland. Photograph: Dave Meehan

A HSE drugs counsellor and a government funded anti-racism charity praised the work of the Church of Scientology during the opening of the controversial organisation’s new Dublin facility.

A representative of the charity, Sports against Racism Ireland (Sari), outlined at the event how it distributes Scientology-produced literature to those taking part in its programmes around the country.

The event was also addressed by a HSE drugs worker who praised Scientology-supported anti-drugs programmes.

On October 14th last, the Church of Scientology opened the “Ideal Org” centre in Firhouse, Tallaght, which includes a 1,050-seat auditorium.

Scientology has been criticised elsewhere for using seemingly innocuous front groups, such as drugs and human rights organisations, to establish itself in a country and to recruit members from vulnerable communities.

A spokeswoman defended its programmes yesterday and described critics of its drugs programme as “religious bigots” who “complain about anything, even saving the life of a mother’s child”.

In recent years it has stepped up its anti-drugs and anti-psychiatry campaigns in Ireland. This has coincided with the opening of a “national affairs office” on Merrion Square in 2016, the first such office to open outside the US.

Both the HSE and Sari distanced themselves from Scientology when contacted by The Irish Times and said they do not endorse Scientology programmes, with one Sari official saying it was “duped” into taking part in the event.

The event included a speech by church leader David Miscavige and an address by Amina Moustafa Keogh, described as a “programme director” with Sari.

Sari chairman Perry Ogdan said he believes the church misrepresented his organisation as supporting Scientology and he was “still trying to get to the bottom of what happened”.

He said Ms Keogh went with the understanding that she would be speaking at a separate event and not at the opening ceremony.

Another Sari official, who asked not to be identified, said Ms Keogh had been “duped” into appearing at the event and he had threatened legal action against Scientology if it did not remove a report from the web mentioning her appearance.

“The plan was we would go out and talk about human rights and nothing else. Then to our surprise and shock her photograph appeared with a quotation on their website. It’s crazy.

“We were basically duped into attending. Amina was duped into making a short speech.”

He said Sari has distributed Scientology affiliated human rights material to children in the past but not recently. The materials, which have been seen by The Irish Times, are funded and printed by Scientology but do not mention the organisation.

Sari promotes sport as a means of combating racism and other forms of discrimination. In 2015, some 40 per cent (€31,500) of its funding came from government sources.

HSE drug outreach worker Nicola Keating also made a speech endorsing Scientology’s “Drug Free World” programme which she said was “straight-talking and speaks to everyone”, the Scientology website stated.

A HSE spokeswoman told The Irish Times: “Ms Keating was not attending the event in her capacity as a HSE outreach worker, she was attending as a member of the community in her personal capacity.

“The HSE does not endorse the Scientology ‘Drug Free World’ programme,” she added.

Asked about the nature of both women’s appearance at the event, a Scientology spokeswoman said: “Both Ms Keating and Ms Keogh were invited to speak, which they were happy to do.”