At least 6,000 homes still without power and storm causes localised flooding in Limerick 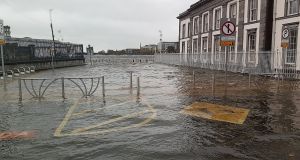 A 52-year-old father of five was killed in west Cork on Sunday when he fell from a teleporter while repairing farm buildings damaged by recent storms.

An investigation was launched immediately by gardaí in Clonakilty, and by the Health and Safety Authority, following the tragedy, which occurred shortly after lunchtime.

The man, who was from Enniskeane, was working in the teleporter to repair a damaged steel roof farm at a holding at Kilgarriffe, when he fell more than 6m from the teleporter’s bucket and suffered fatal injuries.

Emergency services were alerted and paramedics worked intensively on the man, but he was pronounced dead. His body was taken to Cork University Hospital. A postmortem is due to be carried out on Monday.

Meanwhile, gardaí in Bray are investigating the death of a man in his mid-70s on Saturday afternoon at about 3.30pm at Kilmacanogue, Co Wicklow.

Gardaí said they were alerted that a man had fallen from a ladder while carrying out repairs to his farm shed. His body was removed to St Columcille’s hospital in Loughlinstown, where a postmortem will take place.

The Health and Safety Authority have been notified and investigations are ongoing, according to the Garda Press Office. However, it was not confirmed that the man’s death was weather-related.

Crews from the French electricity company, EDF worked alongside their Irish colleagues in Cork to restore power to homes. Counties Cork and Wexford remain the worst affected by last week’s weather.

In a renewed safety message, ESB Networks said: “If you come across fallen wires or damaged electricity network, never, ever touch or approach these as they are live and extremely dangerous.

“ESB Networks is acutely aware of the tremendous difficulties and frustrations of communities,” it said, “We sincerely apologise to those affected and we ask the public to reach out to those in their communities without supply.”

Storm Brian brought some localised flooding, particularly in Limerick. In Corbally on Saturday, Tom Bolger of Mill Road in Corbally could only look on as the Shannon swept into his home.

“We got three inches of water in right across the house. Unfortunately it was the tide and the wind together that did it,” said Mr Bolger. “After it went out, we started to mop up. We’ve been flooded about five times since the 1970s.”

The wind carried the river swell over flood defences in Limerick city at Clancy’s Strand but no houses were flooded. Flood defences held, too, on the south side of the river, though there was spot flooding at Merchants Quay Plaza, Limerick courthouse, the Potato Market, and City Hall.

Ambulance paramedics, gardaí, firemen and divers were alerted to a possible emergency on the River Shannon, only to discover two kayakers who did not require any assistance.

“I don’t care how experienced you are, you shouldn’t be in the water when it’s stormy like this. Someone might think you’re in trouble and call us, and then it’s a waste of our resources,” said one emergency worker.

Fears that high tides could have led to serious, widespread damage all around the coast proved unfounded, however. Inland, the Blackwater burst its banks in north Cork but there was only minor impact in both Mallow and Fermoy.

Meanwhile, a young Traveller couple with a one-year-old baby have been sleeping in a van since Storm Ophelia blew the roof off their mobile home at a halting site in Cork.

The couple, both aged 21, were in the caravan last Monday when the high winds damaged the roof of their caravan at Spring Lane Halting site in Ballyvolane on the north side of the city.

“I was in bed when I heard a noise coming from the roof. When I opened the door the roof was swinging off and then it blew away like a balloon in the air,” said the man , who did not want to be named.

“We have been sleeping in the van since. Edel House did organise for us to go to a hotel the first night. But now the city council wants to split us up as a family. They want to send us to different places,” he said.

However, Cork City Council said housing inspectors had called to the halting site on Tuesday, which was the earliest possible time due to Ophelia. “Emergency accommodation was available to all who wanted it,” the council said.