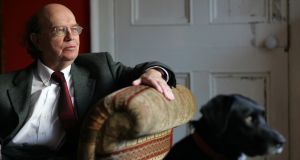 The death yesterday of poet, novelist and critic Anthony Cronin brings to an end a remarkable link with the bohemian literary world of mid-20th century Dublin.

He died at his home in Dublin aged 88 after battling poor health in recent times.

In a varied career, he was one of the best known cultural commentators in Ireland over the past 50 years and also served as an arts adviser to the late taoiseach Charles Haughey.

Born in Enniscorthy, Co Wexford, he studied at University College Dublin, qualified as a barrister but never pursued the career. Instead of the law library, Cronin preferred the literary milieu of a grim post-war Dublin where contemporaries included Patrick Kavanagh, Brendan Behan and Flann O’Brien.

He socialised with them in the Dublin city centre literary pubs and wrote about it in his frank and unsentimental 1976 memoir, Dead as Doornails.

It showed that for all the literary genius and humour there was much heavy drinking, petty rivalries and poverty. He refused to excessively romanticise the era in the many radio and television interviews he participated in over the years.

His experience influenced him in collaborating with Mr Haughey to set up Aosdána to support artists and writers.

He was appointed as a Saoi of Aosdána in 1993, joining the likes of Samuel Beckett, Seamus Heaney, Sean Ó Faoláin, Mary Lavin, Tony O’Malley and Brian Friel.

Cronin published 14 volumes of poetry as well as biographies of Beckett and O’Brien.

He also published the novels The Life of Riley and Identity Papers and wrote the weekly Irish Times column Viewpoint between 1973 and 1980.

Many of the tributes referred to his influential role in setting up Aosdána.

Aosdána itself, in a statement, said Cronin would want to be remembered primarily as a poet. “But as the moving spirit in the foundation of Aosdána, he was also one of the most significant figures in Ireland’s cultural history,’’ it added.

President Michael D Higgins said his commitment to the right of artists to simply survive in the most basic sense led to his role in establishing Aosdána.

“His version of the Republic was one of a republic of ideas, international, informed and not bound by a single language,’’ Mr Higgins added.

Cronin was married to Therese Campbell, from whom he separated in the mid-1980s. She died in 1999. They had two daughters, Iseult and Sarah; Iseult was killed in a road accident in Spain.

He is survived by his second wife, author Anne Haverty and by his daughter Sarah.