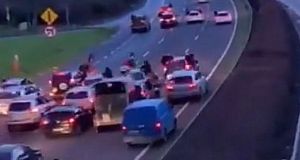 Street lights, empty roads and relative darkness suggest the race was held in the early hours of the morning.

Animal rights advocates have said the emergence of video footage showing a sulky race that cut off four lanes of a Dublin motorway has renewed focus on the need for safe, off-road and regulated facilities.

The video circulating on social media shows two horse-and-carts racing at speed down the inbound lane of the N7 at Citywest in Dublin last weekend, surrounded by a phalanx of cars and vans to the front and rear.

Low light appears to indicate it was either late in the evening or early in the morning and while their is relatively little traffic much of it is built up behind the participating vehicles. The video has prompted a critical response.

The Irish Society for the Prevention of Cruelty to Animals (ISPCA) said driving horses on hard road surfaces can cause serious injuries. Collisions with vehicles have also resulted in the death of animals in the past, it said.

“It is also a risk for other road users and another serious accident or fatality is inevitable,” said chief executive Dr Andrew Kelly. “Action should have been taken then to take sulkies off public roads.”

Dr Kelly referenced the death of a 12-year-old boy who was thrown from a sulky car beneath the axles of an oncoming truck in 2016.

As well as calling for a policy of zero tolerance by gardaí, he said it was “time that sulkies were taken off the road by a system of licensing and registration and the provision of a safe off-road alternative” reopening an ongoing debate.

Oein de Bharduin of the Irish Traveller Movement (ITM) said “anyone reasonable seeing that video would be horrified” and that the activity could not be supported.

However, he said while sulky racing was often only discussed in a negative context, such incidents did provide an opportunity to debate the need for further education and facilities.

“Everyone agrees there is worth and value in sulky racing,” he said, adding that the pastime, which dates back centuries in Ireland, was enjoyed by a broad community and not just Travellers.

“I think people jump in as if it’s just Travellers whereas in fact it’s an entire movement.”

Some efforts had been made to provide facilities in Dublin, he said, such as at the Portmarnock Raceway which has progressed from being a one-off event, but more was required.

“For many people [racing is beneficial] for their mental health, the connection around social engagement; it’s both a pastime and a hobby,” he said.

Gardaí at Rathcoole are continuing their inquiries into the incident.

Conor Faughnan director of consumer affairs at the AA said the incident did not prompt much reaction from road users but he noted there was little apparent traffic on the road when it occurred.

Noting the obvious danger, he said cultural and sporting activities of any kind should be facilitated in safe designated areas and that in many cases roads can be safely cordoned off for planned events.

Last June, Martin Blake, chief veterinary officer at the Department of Agriculture told an Oireachtas Committee that efforts had been taken to promote awareness of animal welfare among sulky racers.

“A key element of the programme is to encourage participants to move off-road and to engage with regulated Irish Harness Racing Association activities.”

Mr Blake said the department also supported an education programme in Limerick with a focus on horse welfare.