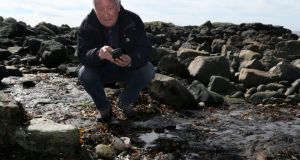 Prof Mike Williams, geologist wtih NUI Galway Earth and Ocean Sciences, recording data on the remains of an oak trackway, estimated to be between 3,700 years old, on the shoreline near Furbo. The trackway was uncovered by last winter’s storms. Photograph: Joe O’Shaughnessy

The north Connemara coastline could be one of this island’s richest “time capsules” of life before sea levels rose, according to State archaeologists who have removed a 3,700-year-old structure from the shore in Co Galway.

A team from the Underwater Archaeology Unit has excavated the entire oak structure, resembling an ancient trackway, which was exposed on the coastline at Lippa near Spiddal by last winter’s storms.

The “trackway”, discovered earlier this spring, may in fact be a very well-preserved and highly significant example of a fulacht fiadh, or ancient cooking place, constructed at a time when forests and lagoons extended out into what is now Galway Bay.

The timbers could be part of a wooden trough which was encircled by 17 hazel rod stakes, according to the unit’s head, Finbarr Moore.

“It is very significant, as it is unusual to find a fulacht fiadh at such a level of preservation, but the sea obviously conserved it when levels began to rise,” he said. “While thousands of fulacht fiadh have been recorded and excavated during road-building schemes, most of them are stone-lined and have a mound of burnt stone nearby. We found no firecracked stones near this structure, but the wattle surround could be unique.”

Preservation in situ of the archaeological material was “not a realistic option”, as the timbers were not fastened to any underlying structure and would not have survived another period of storms, he said.

The structure was identified by Galway resident Alan Keogh while out walking the shoreline. He alerted NUI Galway geologist Prof Mike Williams, who has done extensive research on the topography of the area, including the 7,500-year-old “drowned forests” recently uncovered along the Atlantic seaboard.

Prof Williams’s initial estimate that it could be of late Neolithic or early Bronze Age origin was backed up by radiocarbon analysis undertaken by local community activist Seán Ó Coistealbha which dated it to 1,700 BC.

Mr Moore said the entire area was surveyed before the excavation. “It highlights the fact that there was several thousand years of human activity in this area before sea level rise, and this part of the coastline, and further, is akin to a time capsule – with enormous potential.”

Prof Williams and Mr Ó Coistealbha both welcomed the fact that the structure had been taken into State care, but expressed the hope that resources might allow for its eventual housing in Galway City Museum.

Mr Moore said the timbers were being kept in an “appropriate wet environment” at the unit’s base in Cork and were in the care of the National Monuments Service.

The Department of Arts, Heritage and the Gaeltacht said: “Once the excavated material is fully analysed and recorded, a decision will be made on its long-term conservation, in consultation with the National Museum of Ireland. ”