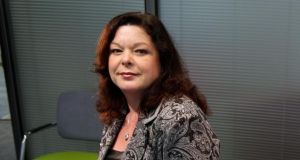 Former Progressive Unionist Party leader Ms Purvis said the Northern Assembly “forces” any woman who is pregnant as a result of rape or incest, and wants an abortion, to continue with that pregnancy against her will. Photograph: Paul Faith/PA Wire.

Abortion law in Northern Ireland is draconian and in need of urgent reform, Amnesty International has said.

Speaking in Belfast on Thursday when publishing a new report, Grainne Teggart, a Northern Ireland campaigner with Amnesty, said legislation in the North was the “harshest in Europe” and “draconian”.

Ms Teggart said that the North’s abortion legislation was in significant breach of the British government’s international human rights obligations.

She said that in Northern Ireland a woman undergoing an unlawful abortion or anyone assisting her could face life imprisonment.

“That sentence even applies in cases where the pregnancy is as a result of rape or incest, or in cases of fatal foetal impairment,” she said.

“The shameful lack of political action on this key issue has helped to create a climate of fear for medical professionals. Hundreds of women are forced to leave Northern Ireland every year just to access health care to which they should be entitled. That only adds to the trauma the women experience.”

She added: “Northern Ireland’s politicians have shirked their responsibilities to women’s health for too long. The Department of Health needs to fulfil its duties to women and girls in Northern Ireland by publishing proper guidance for its frontline staff, while the Assembly must act without further delay to reform abortion law.”

Ms Purvis, a former Progressive Unionist Party leader, said the Northern Assembly “forces” any woman who is pregnant as a result of rape or incest, and wants an abortion, to continue with that pregnancy against her will.

“This is degrading and inhumane treatment,” she said.

“Politicians have the power to change this situation and to prove to women that they do care about them, they do value them as equal citizens and they trust them to make choices that are right for them. Until that happens women in Northern Ireland will continue to remain second-class citizens in the United Kingdom. ”

Ms Stenson said that since 1970 a total of 59,614 women from Northern Ireland “have had no other choice but to travel to England to seek abortion care”.

“No politician in a civilised country should force a woman to leave her family and loved ones to make a journey to another jurisdiction for abortion treatment. Taking the decision to end a pregnancy is journey enough for any woman,” she added.

The Alliance Minister of Justice David Ford has published draft proposals that could see abortion permitted in Northern Ireland in cases of lethal foetal abnormality and in instances of rape and incest.

The 1967 British abortion Act does not apply in the North where each year about 40 legal abortions take place. Termination is permitted in the North where it is “necessary to preserve the life of the woman or there is a risk of real and serious adverse effect on her physical or mental health, which is either long-term or permanent”.