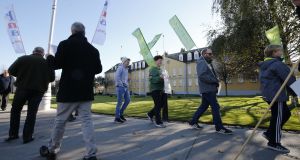 A planned strike next week by some ambulance personnel has been deferred after the HSE threatened to seek a court injunction to prevent it going ahead.

Staff in the National Ambulance Service who are represented by the Psychiatric Nurses Association (PNA) had planned to stage a 24-hour stoppage on December 19th in an escalation of a dispute over union representation rights and the deduction of union subscriptions from pay.

The union said on Thursday the planned stoppage involving paramedics, advanced paramedics and emergency medical technicians has been re-scheduled for Tuesday January 22nd.

The PNA said it was now seeking the Workplace Relations Commission to become involved both on the substantive issues and on the refusal by the HSE to negotiate on contingency plans for industrial action.

Union sources said the HSE had threatened on Tuesday to seek a court injunction to stop the strike taking place next week and would not engage on contingency plans.

The union maintained that its National Ambulance Service Representative Association (NASRA) branch has about 500 members in the ambulance service.

It argued that the HSE has been refusing to engage in negotiations or to make payroll deductions of union subscriptions on behalf of its members in the ambulance service.

The HSE has maintained that it does not recognise the PNA as a representative body for ambulance staff personnel.

The HSE said last month that recognising the PNA as a representative body for ambulance personnel would undermine agreements in place with the trade union Siptu and would impair good industrial relations.