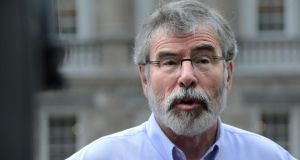 Sinn Féin leader Gerry Adams: “The only suggestion so far by members of this Government has been around inviting British royalty.” Photograph: Cyril Byrne/The Irish Times

Former taoiseach John Bruton’s remarks that the Easter Rising and War of Independence were “completely unnecessary” serves to “denigrate the sacrifice of the participants and their families”, Sinn Féin leader Gerry Adams has said.

Mr Adams was referring to a detailed submission to Government by Mr Bruton in which he contended Home Rule was on the statute books and would have been implemented at the end of the first World War in any case. He added that the violence of that period “should not be retrospectively justified in the other commemorations that are to be undertaken over the next 10 years”.

Mr Adams yesterday criticised the Government’s preparations for the centenary of the 1916 Rising and said Mr Bruton’s remarks had caused “further concerns” before calling on Taoiseach Enda Kenny to clarify his own view on the matter. “I have been raising for some time now both in the Dáil and elsewhere, the widespread concern at what has so far been a minimalist approach to marking the 100th anniversary of the Easter Rising,” he said.

“There is as yet no programme of events for the anniversary and the only suggestion so far by members of this Government has been around inviting British royalty. The Government’s treatment of the historic Moore Street 1916 battlefield site has been a disaster, with the desires of property developers getting precedence over the need to preserve and promote our national heritage.

“In this light, the remarks of former taoiseach and Fine Gael leader John Bruton that the 1916 Rising was a mistake have caused further concern.

“For the record, the 1916 Rising was a seminal event in Irish history, a decisive blow in the struggle for Irish freedom. It is incredible that a former taoiseach – a position that would never have existed but for the Easter Rising and the [Black and] Tan War – would denigrate the sacrifice of the participants and their families in this way.”