Maureen O Hara, the Irish-American actor famed for her flaming red hair and her role in The Quiet Man, has died aged 95. 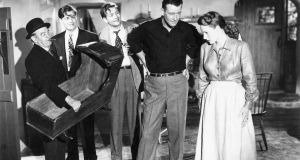 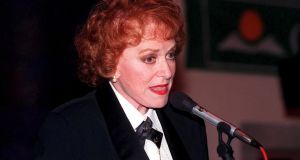 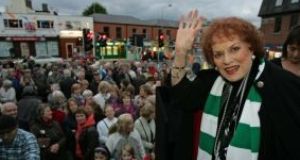 Actress Maureen O’Hara opens the Ranelagh Arts Festival in 2010. The opening was something of a homecoming as the Hollywood star was born and grew up in Ranelagh. Photograph: Frank Miller/The Irish Times 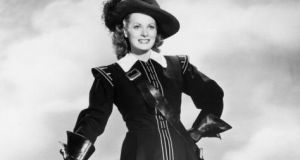 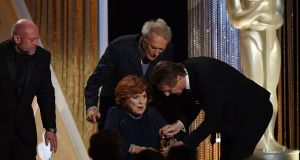 Actor Maureen OHara (centre) with Clint Eastwood (centre, top) and Liam Neeson (right) as she receives an Honorary Award by the Board of Governors of the Academy of Motion Picture Arts and Sciences during the Governors Awards Ceremony in 2014. Photograph: MARK RALSTON/AFP/Getty Images) 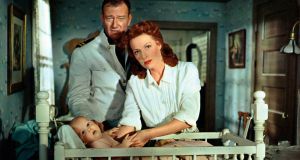 American actor John Wayne and Maureen O’Hara looking after a child in ‘The Wing of Eagles’ from 1957. Photograph: Mondadori Portfolio by Getty

The actor Maureen O’Hara, famed for her flaming red hair and her role in The Quiet Man, has died aged 95.

Her family confirmed in a statement that she passed away peacefully in her sleep at her home in Boise, Idaho on Saturday morning surrounded by family.

Born in Ranelagh, Dublin in 1920, O’Hara was the eldest of six children in the Fitzsimons family. The Abbey Theatre-trained actor became a naturalised US citizen in 1946 and held dual Irish-US citizenship.

Her early films included My Irish Molly and The Hunchback of Notre Dame, but it was for director John Ford’s The Quiet Man (1952), in which she starred opposite John Wayne, that she will be best remembered.

“It is with a sad heart that we share the news that Maureen O’Hara passed away today in her sleep of natural causes,” a statement from the Fitzsimons family read.

“Maureen was our loving mother, grandmother, great-grandmother and friend. She passed peacefully surrounded by her loving family as they celebrated her life listening to music from her favourite movie, The Quiet Man.”

The family said that as an actor, O’Hara brought “unyielding strength and sudden sensitivity to every role she played”.

“Her characters were feisty and fearless, just as she was in real life. She was also proudly Irish and spent her entire lifetime sharing her heritage and the wonderful culture of the Emerald Isle with the world. Later in life, she became the first woman president of a commercially scheduled airline in the United States. ”

She had, they added, remained a champion of the arts, aviation and all things Irish throughout her life and never lost her joy and wonder of these pursuits.

“As much as Maureen cherished her privacy, she always appreciated the expressions of good will from people around the world and from all walks of life. She especially loved it when children recognised her from her role in Miracle on 34th Street and asked her: ‘Are you the lady who knows Santa Claus?’ She always answered: ‘Yes I am. What would you like me to tell him?’”

RIP #MaureenOHara from one tough redhead broad to another. Thankful for the light you shared https://t.co/TFX3GkJVi4 pic.twitter.com/ExAupBOIFc

“While we mourn the loss of a very wonderful woman, we also celebrate her remarkable life and hope that it serves as an example to young people around the world, especially in Ireland, to work hard to make their dreams come true and to always have the courage to stand up for themselves.

“For those who may ask what they can do to honour Maureen, we have a simple request: visit Ireland one day and think of her.”

President Michael D Higgins, who is on an official visit to the US, said O’Hara would be remembered as an “outstanding and versatile actress whose work, especially in film, will endure for many years to come”.

“I especially remember with affection her recent visit to Áras an Uachtaráin, when we discussed among other things her great love of Ireland and her strong family links to Shamrock Rovers,” said Mr Higgins.

Johnny Nicoletti, her manager and biographer said “at 95, she used to say that she had the wear and tear that came with that kind of mileage”.

“Her and John Wayne [her co-star in The Quiet Man] used to always have a saying, ‘We are a couple of Rolls Royces and mileage never hurt a Rolls.’ She also used to say, ‘Old age is tough, especially when you are so young.”

Her manager said that Ms O’Hara had “a wicked sense of humour and never took her good fortunes for granted.”

“She was a classy, warm, feisty, funny woman and she was always so proudly Irish,” he said.

Ms O’Hara will not be buried in her native Ireland but at Arlington National Cemetery near Washington, DC, next to her husband, the US Navy pilot General Charles Blair who died in a plane crash in 1978.

Mr Nicoletti said Ms O’Hara died without ever revealing, even to her closest relatives, one of Hollywood’s most famous secrets: what she whispered in Wayne’s ear at the end of The Quiet Man to elicit the shocked reaction that director John Ford sought from the star.

“She held it and took it to the grave,” said Mr Nicoletti.

“All three of them took it to the grave,” said her manager. “I tried to get it out of her but she said, ‘We all made a promise.’”

Ford asked O’Hara to say a particular sentence in Wayne’s ear in order to get an expression of surprise for the camera. She initially refused but eventually agreed as long as the three of them kept it a secret.

The scenic coastal home on 35 acres was placed on the market in October last year with an asking price of €2.3 million after O’Hara moved permanently to the US to be close to her family.

O’Hara was inducted into the Irish America Hall of Fame at an event in Wexford in 2011.

She was also awarded an honorary Oscar last year.