Since 1990s, employers ‘walked away from responsibilities’, Fórsa conference hears 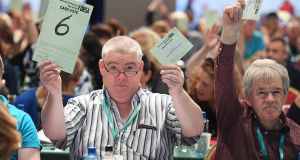 A substantial number of people in the private sector – most of them women – are “staring at poverty in old age” due to not having an occupational pension, the annual conference of Fórsa has heard.

The union, the country’s second-largest, welcomed Government proposals for a new three-way pension scheme involving employee, employer and the State for workers, but said employers must pay more.

Delegates were told 60 per cent of private sector workers currently have “no occupational pension at all”.

Women had lowest of all pension cover and were facing poverty in old age, Fórsa national secretary Billy Hannigan told delegates at the conference in Killarney. Ireland is one of only two OECD countries with no mandatory earnings-related pillar to complement the State pension, he noted.

“We welcomed the proposed system, which would provide mandatory pension entitlements for all workers wherever they are employed. But employer contribution has to be twice that of the worker,” Mr Hannigan said.

Since the 1990s, a large number of employers including very profitable companies, “have simply walked away from their pension responsibilities,” he said.

He also called for the scheme to be administered by the Revenue Commissioners “to avoid excessive fees from private pension providers”.

“The new scheme is being established to provide administration and fee-based income for private pension providers for citizens. The State should administer the scheme and the State should mind the funds,” he said.

Motions calling for mandatory employment-based pension provision for all workers, regardless of what sector – public, private, or voluntary – not currently covered by pension schemes were endorsed.

Meanwhile, the union also welcomed the publication of the special needs assistants (SNA) allocations for the 2018/19 school year.

The union, which represents 8,500 SNAs nationwide, said it welcomed both the allocation of 940 additional posts and the timely publication of the allocations.

“Above all we’re very pleased that SNAs now have certainty about the next academic year,” deputy general secretary Kevin Callinan said. “I think it’s important to acknowledge that the Minister [for Education Richard Bruton] stuck to his word on the timing of the allocations, and I trust this marks a new approach for the future.”

In 2017, they were not published until July, meaning hundreds of SNAs finished the school year without knowing if they would have a job the following September.

Assistant general secretary Seán Carabini said SNA employment is more precarious than many other public sector professions due to the fact that allocations are reviewed on an annual basis.

“When a school’s SNA allocation is reduced, SNAs lose their jobs. However, an SNA that loses their job can opt to be placed on the supplementary assignment panel and apply for other SNA posts that arise in their area,” he said.

“Today’s allocation announcement represents a significant victory for SNAs and demonstrates the power of collective action. It also sends a very clear signal that SNAs will not tolerate being treated in any manner that fails to give the profession its due respect.”

He said SNAs will continue to “come together under the Fórsa banner to ensure that, in future years, the allocations process is both respectful and timely”.