Women should not be ‘treated like cattle going through a chute’ 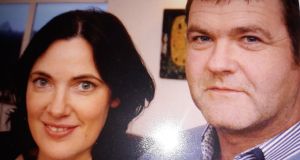 A woman who suffered complications during the birth of her two sons at Portiuncula University Hospital says the HSE must ensure the recommendations of the review into the hospital’s maternity services are implemented so that women are no longer “treated like cattle going through a chute”.

The delayed report, which was commissioned in January 2015, examines the delivery and neonatal care of 18 babies at the Galway hospital between 2008 and 2014. Some of the babies died while others were left with life-long disabilities.

Eimear Grennan from Tullamore in Co Offaly was a week overdue with her first baby when she went in for an appointment in Portiuncula Hospital in February 2012.

She was induced the following morning and gave birth to her son Cole. The couple were told that when Cole was born the umbilical cord was wrapped around his neck and he had developed sepsis and pneumonia. They say there was never clarity around exactly what was wrong with their son who went on to make a full recovery.

Two years later, Ms Grennan returned to the Galway hospital to give birth to her second son Finian. She was two weeks overdue when she was induced. When Finian was born Ms Grennan said he seemed healthy for the first few minutes but then was taken away by staff.

Finian began to struggle and was resuscitated before being transferred to the Rotunda Hospital in Dublin for treatment. From there he was flown to Sweden for life-saving ECMO (extracorporeal membrane oxygenation) treatment which pumps oxygen into the blood. He returned to Portiuncula Hospital for three weeks and made a full recovery.

Like other parents who cases of maternity care were examined in the report, Ms Grennan says she was told the experience of her first delivery was a “once off” and had not happened in the hospital before. “What really concerned us was that everyone kept saying this has never happened before. But nobody was interested in why it happened.”

“Why did something like this happen twice? We presumed there would be more care taken the second time.”

Ms Grennan said she had researched hospitals before giving birth to Cole in 2012 and was reassured by a member of staff at Portiuncula that she would receive the same care whether she chose to give birth in a public or private hospital. “I was told the only difference was I would get a private room but that was very much not the case. Women who go public are not getting the same treatment as women who go private. In private hospitals you see the consultant all the time, you build a relationship with people in the hospital. In my situation I saw a different person every time. There was no consistency in the care.”

Ms Grennan agrees with the report’s finding that staffing issues plays a role in the hospital’s standard of care for mothers and their babies. “There are really good people working in Ballinasloe but they’re so understaffed. The HSE needs to do a lot more to make it a proper caring system or more of this will happen. What I’m talking about is the HSE actually funding improvements and not just leaving it half done.”

“I’d like to see them committed to these changes so that when women do go into maternity care they’re not treated like cattle going through a chute. These are people, this is a big deal. It’s a very special and important time and it’s not just run of the mill.”