Headway, the brain injury services and support organisation, has teamed up with Ireland’s leading GAA, soccer and rugby player unions to launch the Concussion Aware campaign in association with Laya Healthcare and Lifestyle Sports. 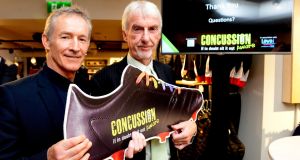 Dr David Connolly of Dundalk FC with Kieran Loughran, chief executive of Headway, at the launch of a concussion awareness programme in Dublin on Tuesday. Photograph: Cyril Byrne/The Irish Times

Universal protocols for dealing with sports-related concussions should be introduced to prevent instances of serious injury and even death, a campaign group has said.

At the announcement of its Concussion Aware campaign on Tuesday, advocacy group Headway published research showing that less than one-in-six Irish people know how to manage a concussion.

The vast majority of the 1,000 people surveyed by polling firm Amárach were unaware that concussion can be caused by blows to parts of the body other than the head, while half of parents spoken to were unsure that their child would tell them if they received a concussion.

The organisation has started a social media awareness drive using #ConcussionAware to inform the general public about the issue, as well as steps that can be taken to alleviate the side-effects of concussion.

The campaign is particularly aimed at parents of young children and amateur sportspeople, who are unlikely to have expert medical backup on the sideline to deal with the repercussions of a serious blow.

Headway is hoping to raise €15,000 through the sale of special Concussion Aware bootlaces between now and Christmas, money that will go towards raising further awareness of concussion and supporting individuals who have been affected by acquired brain injury.

“The professional rugby world has moved very quickly, I think everybody is catching up. I think a set of consistent protocols across all sports would be very useful.”

Rugby players typically face a three-week layoff from competitive action if they receive head injuries, and Headway is seeking to bring particular attention to the potentially dire consequences of second impact syndrome where a player receives two concussive knocks in quick succession.

“We’ve had some tragic cases which it’s awful to speak about where we have young teenagers who’ve died from second impact syndrome because the signs and symptoms weren’t recognised in the first impact,” said Headway director and Irish Rugby Union Players’ Association chief executive Omar Hassanein.

The campaign also has backing from players’ associations in soccer and GAA, as well as Laya Healthcare and Lifestyle Sports.

“It was only a couple of days after that I started getting all the symptoms of post-concussion and that stayed with me for a number of months after it. I was getting irritated easily, not sleeping well, pains in your head,” he said.

“Concussion is a very hard injury, I think, because it’s something people physically can’t see. If I’m at a match and I’m not togged out people think I should be playing, but I don’t have a cast on my leg and I’m not on crutches.

“People say ‘what’s wrong with him, why can’t he play?’ because the understanding might not be there.”

He stressed the importance of people recognising the signs of concussion which include: dizziness; nausea; headache; slurred speech and confusion. He encouraged players to leave the field and not return if they sustain the injury.