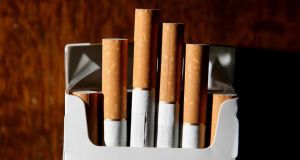 Two new polls, released today to coincide with Minister for Health Dr James Reilly’s introduction of the plain packaging Bill at the Oireachtas Health Committee, give very different impressions of the public’s view on the issue.

The new law will result in large graphic warnings of the potential harmful consequences of smoking displayed on cigarette packs and make it illegal for tobacco companies to use colour, text and packet size to market cigarettes.

According to a survey conducted by Ipsos MRBI for a coalition of organisations – including the ISPCC, Barnardos, the Children’s Rights Alliance, the Asthma Society of Ireland, the Irish Heart Foundation, Irish Cancer Society, ASH Ireland and the Irish Thoracic Society – 71 per cent of Irish people support new legislation to remove all branding from cigarette packs.

The Ipsos MRBI poll – conducted with 1,000 adults aged over 15 years of age shows that whilst the plain packs have the backing of 74 per cent of non-smokers, a majority of smokers are also in favour, with 58 per cent supporting the Government legislation which is due to come into force next year. Men at 73 per cent were also more supportive of the legislation than women at 69 per cent.

“This poll shows the Irish people are strongly behind the Government commitment to protect the health of children by introducing the plain packs that our previous research proves will discourage children from smoking,” said Irish Heart Foundation head of advocacy, Chris Macey.

However, a poll of 1,002 adults carried out by Red C for the smokers’ group Forest Éireann, shows that just nine per cent of people believe plain packaging on cigarette packs is the policy most likely to reduce youth smoking rates in Ireland.

Of four policy options considered in the poll, mandatory health education in schools (51 per cent), tackling the illicit trade (23 per cent) and banning adults from buying cigarettes for children (14 per cent) are all considered more likely to work than plain packaging (9 per cent).

“The poll shows just how out of touch Minister Reilly is” claimed John Mallon, spokesman for Forest Éireann. “He has made plain packaging of tobacco a personal mission but only a very small minority think it is the best way to stop children smoking. Even fewer want it to be his number one priority in 2014.”