Anger over allocation of €2.8m to refurbish building for administration purposes 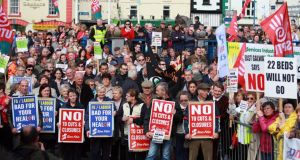 A section of the crowd at today’s protest march organised by community groups and supported by health service unions over the planned closure of all acute inpatient psychiatric beds at St Bridgid’s Hospital, Ballinasloe. Photograph: Hany Marzouk

A crowd estimated at 2,500 took to the streets of Ballinasloe, Co Galway today to protest at a decision by the HSE not to open 22 acute mental health beds at a state-of-the-art facility in the town.

It was the latest demonstration of public anger across east Galway and the midlands at the controversial move by the HSE to instead use the €2.8 million refurbished building primarily for administration purposes.

The Psychiatric Nurses Association criticised the decision and pointed out that the Ballinasloe facility had been custom built to specific requirements for acutely ill patients.

“This was constructed as one of the most modern mental health facilities in the country. It is a ligature-free environment and was built with acute patients in mind”, said PNA National Secretary, Noel Giblin.

Mr Giblin added: “All of the fixtures and fittings are sledge-proof, meaning they cannot be broken even by a sledge hammer, and I understand that there is bullet-proof perspex in the nurses’ stations.

“It beggars belief that this would be used for anything else other than an acute mental health unit. If effectively means that there is no high dependency unit for mental health patients in the Galway-Roscommon region”.

Members of Impact and Siptu, as well as the PNA, were joined on the protest march by the mayors of Ballinasloe, Tuam, Loughrea and Roscommon in a show of solidarity on the issue.

The Bishop of Clonfert, Dr John Kirby and Dail Deputies Denis Naughten, Micheal Kitt and Luke Ming Flanagan also attended alongside hundreds of local people, including friends and families of individuals who have suffered from mental illness.

The chairman of the East Galway Mental Health Action Group, Padraig Mulligan told the protestors that the people of the region would not stand idly by at a time when the most vulnerable in society needed the availability of the acute mental health beds in Ballinasloe.

“The HSE decision to close 22 beds is unacceptable. We’ve just spent €2.8 million of taxpayers’ money on a state of the art unit and the HSE are refusing to open it.

“Instead, they want to build a 50 bed unit on a carpark at Galway University Hospital at a cost of €12 million. The HSE are taking common sense to a new level”, Mr Mulligan said.

He stressed that community services for mentally ill patients were not in place and until they were, the people of east Galway would not give up the 22 beds.

Ballinasloe GP, Dr Annraoi Finnegan described the scoring system on which the HSE decision not to open the acute beds in Ballinsloe was based, as “unreasonable”, while it seemed “ridiculous and illogical” to spend so much money on a mental health facility and not open it.

“We need an independent review of that decision and if it comes up with the reverse of what we are facing, I’d hope the HSE would have the moral courage to then open the 22-bed unit”, Dr Finnegan said.

The HSE pointed out that the refurbished unit could be reconfigured from acute to community based services.

The building where the acute beds were currently located would continue to be used by psychiatry of later life patients and the remainder of the accommodation would be used by the Community Mental Health Teams and as a central base for administration.

“There is no question of the building not being utilised to its fullest extent”, the HSE said.