‘It isn’t a helpline, it’s an answering machine’ - women hit out at HSE cancer phone service 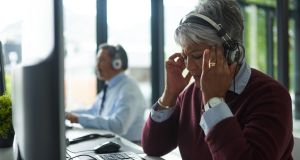 Several women have reported frustration with the CervicalCheck helpline, which was set up following the cervical cancer screening scandal.

Women looking to book a smear test have been left for several days without hearing back from the helpline.

It emerged on Monday that 162 women who developed cervical cancer, had not been told by the Health Service Executive (HSE) that previous smear tests which gave them the all clear were incorrect.

Since Friday the helpline has received more than 6,000 calls, where women are told to leave their details and wait for a call back.

Deirdre Hurley, from south Co Dublin, called the helpline on Sunday morning over “concerns with my past tests”, looking to book another smear test for reassurance. After not hearing anything she called back on Tuesday morning, and was told by an administrator she would be contacted “in a few days.”

“When I rang this morning I was on hold for 15 minutes. It isn’t a helpline it’s an answering machine” she said, adding it was “not satisfactory.”

“It’s not very patient friendly”, Ms Hurley said, adding she did not have confidence in the system and was considering booking a smear test privately.

A spokeswoman for the HSE said the CervicalCheck helpline is “experiencing a very high volume of calls.”

“We have increased staffing levels and are working very hard to ensure we are in a position to facilitate call backs as soon as this can be achieved” the spokeswoman said.

“All they could do was take my contact details and offer a call back, when I told them I had been refused annual smears and now have pain and [BLOOD]spotting nearly five years later. I felt frustrated after the call” she said.

In the last two months Ms Murphy has experienced a pain around her cervix, which has worsened in the last three weeks. On Friday she passed blood, which she said greatly concerned her, as a potential symptom of cervical cancer. Her last smear test was five years ago, and her next test is due this July.

In 1998 Ms Murphy was treated for advanced CIN 3, which are precancerous cells in the cervix. After 2001 she was advised to get a smear test each year until she was 60 years old, which she organised through her local GP.

Following the introduction of CervicalCheck in 2008, she was told they would only provide a free smear test every three years, and then five years after the age of 45.

Ms Murphy said she requested an annual smear test with CervicalCheck several times but was unsuccessful, which she found “frustrating.”

The consultant who advised her to get annual smears initially has since passed away, and so could not write her a report to bring to CervicalCheck, Ms Murphy explained.

She has an appointment with her GP on Tuesday afternoon, to arrange a smear test privately in the next two weeks. “Time is of the essence with cancer. I’d be afraid to leave it three months”, until her scheduled test in July, she said.