Ten things we have learned during Ebola epidemic 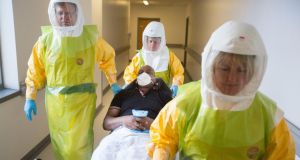 Staff at the Royal Victoria Infirmary hospital in Newcastle, England take part in a national exercise to test Britain’s readiness for an Ebola outbreak. Photograph: PA

1) The virus is deadly, but not in all cases

Despite its reputation, lots of people survive Ebola; the mortality rate in the present outbreak is 50 per cent, according to the World Health Organisation. That’s high, but not as high as the 90 per cent recorded in previous outbreaks. Scientists don’t know why some people survive the disease, but they’re learning lots, fast.

2) Ebola is fearsome, but it can be guarded against

Unlike bird flu or a cold, Ebola can’t be transmitted through the air, according to the weight of scientific advice. It needs contact with infected bodily fluids to spread. So relatively cheap protective clothing, along with the use of quarantine, provides a barrier against contagion.

3) However, it may be more wily than we previously thought

Some scientists have said the possibility Ebola could be spread through the air in confined quarters, for example by an infected person’s sneeze, cannot be ruled out.

4) We’re not doing enough to stop it - still

Ebola thrives on poverty and collapsed societies that can’t protect themselves. Guinea, Sierre Leone and Liberia, the West African states worst hit by the epidemic, can’t muster the resources to defend themselves against the disease. They need our help. They’re getting it, but not enough. As a result, overburdened medical centres are having to turn away sick patients, who then go on to infect others. Which makes no sense.

5) Cruelly, Ebola attacks the bravest defenders against the disease

Doctors and nurses are disproportionately represented among the victims in the current outbreak. Not only are they most likely to be exposed to infected fluids from victims, but they are also working in difficult and often unsafe conditions. We can only salute their bravery.

We knew this already, but the Ebola outbreak has shown how easily and how fast a highly contagious disease can spread. So far, the vast bulk of cases have been in West Africa, but the spread of the disease is evident in the diverse mix of countries where suspected cases have been reported - the US, Australia, Spain, the UK, Macedonia.

7) The potential for modern science to treat, control and maybe even eliminate diseases like Ebola is greater than we suspected

Before the current outbreak, there was little awareness that researchers around the world were working on a treatment and a vaccine for Ebola. Now one experimental treatment has been used on patients with promising results and a vaccine is being tested. Up to now, Ebola was a small disease that killed very poor people, so there was no economic motivation for drug companies to tackle it. That may change now.

That’s what the authorities tell us. It’s true there are no direct flights with West Africa. Suspected cases would be treated in the well-equipped National Isolation Unit in the Mater Hospital. A host of expert committees and teams are have prepared the way to deal with any cas e that arises.

9) Yet there is still cause for concern

Questions have been asked about the lack of screening or contact tracing of travellers arriving from West Africa and the instruction for people with possible symptoms to attend their GP. In addition, the ability of a health service that is already stretching to cope with cases is under scrutiny.

10) When something new and scary comes along, our sense of proportion goes out the window

Ebola is a hypochondriac’s nightmare. Worry about the flu if you fear for your mortality. Worry about malaria, which kills more in a day than Ebola has in months, if you want to improve the lives of people in the developing world. Your chances of catching the disease are minuscule.