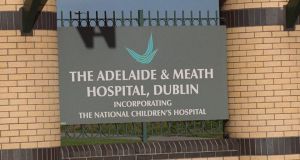 Tallaght hospital said it is cancelling some elective procedures due to overcrowding at the emergency department.

Tánaiste Eamon Gilmore has rejected a claim that overcrowding is putting patients in Tallaght hospital at risk.

Speaking in the Dáil today, he said he had been informed that hospital chief executive David Slevin had stated it was not the case that the health of patients was under threat.

“I understand he has provided assurances that the situation is being managed and that the hospital is providing adequate patient care,’’ he added.

Mr Gilmore said while the hospital was experiencing an unprecedented surge in the number of people attending the emergency department, the situation continued to improve. Currently, there were 19 people on trolleys, he said.

He said the hospital was implementing a response plan to manage the current pressures with a focus on regular ward rounds to increase the numbers of patients discharged.

A meeting would take place with hospital management tomorrow to discuss staff concerns.

The Tanaiste was replying to Fianna Fáil TD Éamon Ó Cuív who said there were 286 patients on trolleys across the country.

Mr Slevin said this morning that the hospital was experiencing an “unprecedented surge” in admissions and that that many of the patients were sicker and had more complex medical requirements than normal.

This was putting pressure on resources at the hospital but he told RTÉ’s Morning Ireland that “Tallaght hospital is a safe place” for patients.

The hospital said it is cancelling some elective procedures due to overcrowding at the emergency department.

The hospital also said it was implementing a plan to deal with pressures in its emergency department.

The Irish Nurses and Midwives’ Organisation and SIPTU have expressed concern about the impact of reduced staffing levels and overcrowding at the hospital.

The INMO claims its members cannot provide adequate and safe patient care in all areas and it has called for the immediate cessation of all elective surgery and the cancellation of all planned procedures.

The unions are due to discuss these issues with management tomorrow morning.

The unions are considering industrial action over the problems.