Graduates with disabilities struggling to find work with lack of support

Medical card should still be available to those in full time work, disability activists say 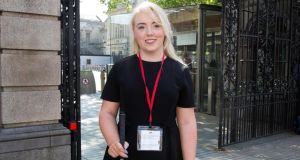 Jessica Ní Mhaoláin: “The HSE seemed to believe that my blindness had been cured overnight with my job.” Photograph: Tom Honan 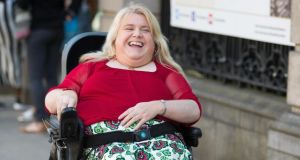 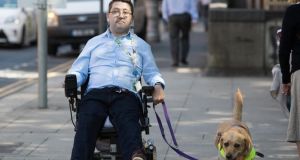 Graduates with disabilities are struggling to find work after completing their education because of a lack of support and guidance structures, three joint committees of the Oireachtas have heard.

Young people with disabilities are being forced to find jobs without guidance counselling or the support of a personal assistant and continue to face discrimination from employers, disability activists told the meeting of the committees on employment affairs and social protection, education and skills, and health on Tuesday.

Some 71 per cent of adults of working age with a disability are not in employment, according to the Central Statistics Office. Those who secure full-time employment lose access to their medical cards and other financial support.

Jessica Ní Mhaoláin, who is visually impaired and graduated with an MA in government from University College Cork in 2016, found that prospective employers rejected her job application as soon as they discovered she walked with a cane.

She said the disability supports at UCC had been hugely beneficial following years of struggling through primary and secondary school. In sixth year, Ms Ní Mhaoláin’s special-needs assistant (SNA) hours were halved. “It impacted on my ability to revise and it was horrendously stressful. I had to be home schooled for the remainder of the year with grinds.”

It took Ms Ní Mhaoláin a year to find work after she graduated. No longer eligible for the medical card, she now spends 10-15 per cent of her salary on health costs.

“The HSE seemed to believe that my blindness had been cured overnight with my job. They didn’t factor in the number of doctor and hospital visits I have each year. My rights as a person with disabilities should never change.”

Eileen Daly, a wheelchair user who counsels students with disabilities, said students in special schools were not receiving the same career-guidance counselling offered in mainstream institutions.

“It demonstrates the lack of value the Government places on anyone who is different and doesn’t fit the mould,” she said, adding that students with disabilities also lose access to their personal assistant once they complete education.

“Many of these people have been told from a young age that they are failures and that they cannot have expectations for themselves. Part of my job is to challenge their internalised perceptions of themselves.”

Padraic Moran, a 24-year-old Paralympics medallist who works full time, said people with disabilities who find employment are penalised under the current benefits system. Like Ms Ní Mhaoláin he lost his medical card and travel pass when he started working.

“The State doesn’t factor in the extra overheads people with disabilities encounter every day. It’s almost like we get forgotten in the crossfire because we’re not seen as a big voting group and we can’t get out and mass protest. We do little bits in Ireland but we don’t do enough. We need more than token gestures,” he said.

Dina McAnaspie (22), who is studying computers and literacy, said transition year should be available to students in special schools so they have the option to take part in a work-experience programme. “I want to work just like everyone else but it can be very hard to get the work experience you need to get a job,” she told the committees.

Independent TD Dr Michael Harty reminded the committees of the important role access to work plays in a person’s well-being and mental health. “Work is like a drug. If people with a disability can get a job it lifts their self-esteem and personal status,” he said.