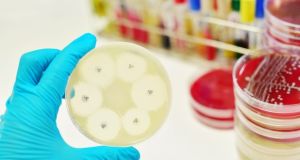 An outbreak of the so-called superbug CPE (Carbapenemase Producing Enterobacterales) has closed parts of Letterkenny University Hospital in Co Donegal.

An outbreak of the so-called superbug CPE (Carbapenemase Producing Enterobacterales) has closed parts of Letterkenny University Hospital in Co Donegal.

A spokesman for the hospital confirmed a number of patients had been diagnosed with the antibiotic-resistant bug and that visitor restrictions have been put in place as a result.

A full deep-clean of infected areas as well as patient placements have also been introduced, he said.

Members of the public are also being asked to only attend the emergency department in the case of real emergencies and to contact their GP or GP out-of-hours service in the first instance.

“A number of beds are closed to admissions in Medical Ward 5 as part of ongoing control measures and this has contributed to longer waits for some patients who need to be admitted,” he said.

Hand hygiene is extremely important to prevent spread of CPE and patients who have been in contact with the bug are treated with extra precautions, such as staff wearing gloves and aprons, to prevent spread to others. They will also be asked to use a specific toilet or commode.

Enterobacteriaceae are bacteria that live harmlessly in the gut of humans and for most patients who carry CPE it never causes any illness.

However, if these bacteria get into the wrong place, such as the bloodstream or bladder, they can cause infections and destroy antibiotics.