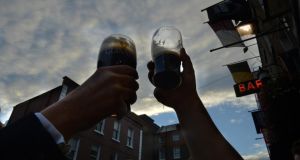 The body representing Irish third-level students has withdrawn from the DrinkAware campaign, citing concerns over its ties to the alcohol industry and muted response to Arthur’s Day celebrations.

DrinkAware.ie promotes “responsible drinking”. It was set up in 2006 by the Moderate Enjoyment of Alcohol group, an industry-funded body.

In a recent letter to Meas chief executive Fionnuala Sheehan, the Union of Students Ireland (USI) said it was no longer co-operating with the initiative following a vote of its national council earlier this month.

“It is felt that we are best placed to develop a student alcohol awareness campaign independently through working with other bodies that are not funded by a self-regulating drinks industry,” wrote USI president Joe O’Connor and deputy Denise McCarthy.

“It may be important to note for your own internal purposes that the continued promotion of the Arthur’s Day festival by Diageo further deepened our concerns regarding the credibility of your alcohol awareness campaign.”

Ms Sheehan said DrinkAware was a “social responsibility organisation”, not a prohibition body. It had never hidden the fact it was funded by the industry and remained independent of it. She pointed to a Millward Brown survey for DrinkAware.ie in which 81 per cent said it was effective “without pointing the finger”.

“This would seem to suggest that separate from any opinion that some USI officers may currently hold, very many individual students see the value of the work being undertaken,” Ms Sheehan said.