‘Stop saying fetuses with disabilities are incompatible with life’ 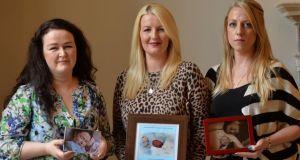 Grace Sharp, Sarah Hynes and Sarah Nugent with pictures of their children Lilly Joy who lived for four hours, Seán who lived for 48 hours and Isabella who lived for 54 days. Photograph: Alan Betson/The Irish Times 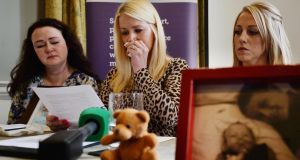 Grace Sharp, Sarah Hynes and Sarah Nugent, parents of children with life-limiting conditions, in support of a proposed bill by TD Mattie McGrath to end the use of the term ‘incompatible with life’ to describe children with profound disability, meaning they will not live for long after birth. Photograph: Alan Betson/The Irish Times

Medical, legal and media professionals have been urged to stop using the term “incompatible with life” to describe unborn children with severe disabilities, by the Compatible With Life, Compatible With Love campaign launched in Dublin on Tuesday.

Tracy Harkin, spokeswoman for support group Every Life Counts, said the term is “medically meaningless, incorrect and enormously hurtful”, and said it was a judgment rather than a medical diagnosis.

Every Life Counts represents families whose children have been diagnosed with life-limiting conditions such as anencephaly (in which parts of a brain, skull and scalp are missing) and Trisomy 18 (a chromosome disorder in which 90 per cent of sufferers do not survive past their first birthday).

At the launch was Mattie McGrath, Independent TD for Tipperary South and West Waterford, who is submitting an amendment to the Disability Act in the Dáil to make it an offence for medical staff to describe an unborn child with a disability as “incompatible with life”.

“The Disability Act precludes terminology and references to people with disabilities,” McGrath said. “This is just an extension of the act, really, an amendment . . . to include the unborn.”

Mr McGrath said he hoped to introduce the bill to the Dáil before Christmas.

Terms such as “incompatible with life”, said Ms Harkin, “need to be discontinued in the same way that ugly descriptions such as ‘retarded’ or ‘illegitimate’ were discontinued, since they have no part in a compassionate society”.

Karen Ludden, a paediatric nurse who advises Every Life Counts, said it could not be predicted, in any medical condition, whether a baby would live, how long it might live, or whether it was incompatible with life.

As part of the campaign, the support group will send letters to obstetricians and gynaecologists across the country to urge ending the term “incompatible with life” and seeking a model of perinatal hospice care in hospitals.

Compatible with love Ms Harkin’s daughter Kathleen Rose (8), the fifth of her eight children, has Trisomy 13, associated with intellectual and physical complications. “We were told when she was born that she wouldn’t be able to do anything, that she’d just lie there,” Ms Harkin said. “But she crawls around the house, pulls herself up and hugs us.

“She’s just a really big character. She’s full of love, that’s really what she is.”

Ms Harkin said that while Kathleen Rose is the centre of their home she is not overprotected. “She’s good for the other children, actually,” Ms Harkin said. “She teaches them patience and generosity and for them to be grateful for their abilities and health.”

On submitting the bill, Mr McGrath said, “As a politician you have to stand for something and I stand for life.” His own grand-daughter was born prematurely in January. “I saw the effort that went into keeping the baby living in the womb and outside the womb, and the joy she’s brought to our family,” he said.

‘Draconian’: TDs from across Midlands shocked and angered over lockdown 20:17
Workers diagnosed with Covid-19 or certified to self-isolate can claim special illness benefit 19:52
Main points: What restrictions have been imposed on Kildare, Offaly and Laois? 19:43
Warning of ‘economic meltdown’ in Kildare 19:28
Midlands lockdown: Movement restrictions in place for residents of Kildare, Laois and Offaly 19:22