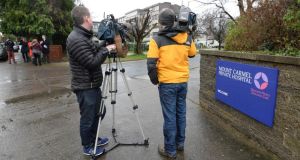 Media gather at Mount Carmel Hospital, Churchtown, Dublin, on the news that a joint provisional liquidator has been appointed to the hospital. Photograph: Brenda Fitzsimons/The Irish Times

Three hundred jobs will go as a result of the closure of Mount Carmel private hospital and many mothers due to give birth there have been left in an uncertain situation.

The hospital in Churchtown, Dublin, delivers about 1,200 babies a year and its closure was described as an “emergency situation” by the National Maternity Hospital.

In another blow to jobs, there were fears last night that there could be significant job losses at Ulster Bank due to restructuring by its UK parent.

Elective surgery at the hospital has ceased and obstetrics patients who are booked in for maternity services in the weeks and months ahead will be transferred to alternative maternity hospitals.

The Government ruled out buying Mount Carmel, the only private maternity unit in the State. Minister for Health James Reilly said the birth rate was falling, with his department pointing to Central Statistics Office projections that birth rates would continue to decline until at least the early 2020s.

It is understood the department and the HSE concluded that buying Mount Carmel as a going concern would unnecessarily expose the State and the health authorities to significant financial risks.

Informed sources suggested Nama had provided support of nearly €10 million to the hospital over recent years.

Against policy
The Department of Health said buying Mount Carmel would be against Government policy, which supported the provision of maternity services on the same sites as adult acute hospitals.

Meanwhile, up to 100 jobs at Ulster Bank’s retail collections unit in Ireland are set to be redeployed to Edinburgh as part of a wider review of the company’s operations by Royal Bank of Scotland. It is understood that details will be announced in the next couple of weeks.

Most of the roles affected are based in Sandyford, Co Dublin, with some in Northern Ireland.

‘Bad bank’
RBS plans to put £9 billion worth of assets from Ulster Bank into its newly formed “internal bad bank”, which will be run down over three years. This move affects about 300 staff at Ulster Bank. While some of these employees may be redeployed, it is expected that most would have to leave.

Staff were told that Joy McAdam, who was put into Ulster Bank two years ago by RBS to run the Irish arm of its Global Restructuring Group turnaround division, would return to London within three months. She will be replaced by a head of RBS Capital Resolution, who will manage the wind-down of the Irish assets in its bad bank.

Separate to this, RBS is carrying out a review of the “good bank” element of Ulster. The results are not expected until late February but the Irish Bank Officials’ Association warned last week that this could include compulsory redundancies, outsourcing, pay cuts, and branch closures.

Commenting on the impending job cuts, IBOA general secretary Larry Broderick said: “We are concerned that the focus will likely be placed on outsourcing. We are concerned that all areas of the business are up for review and we hope that the bank will honour previous agreements that any change will be on a voluntary basis.”

No comment was available from Ulster Bank last night.