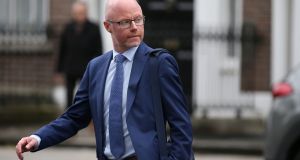 The State is currently facing significant challenges in the recruitment and retention of health and social care professionals, Minister for Health Stephen Donnelly has said.

The Minister was speaking at the annual conference of the Psychiatric Nurses Association (PNA) on Thursday, where he also noted that a new strategic unit had recently been established in the Department of Health to define health service workforce needs across the entire sector into the future.

PNA general secretary Peter Hughes said that given a requirement to recruit an additional 200 staff for the facility, the new National Forensic Mental Health Service in Portrane, which will be handed over to the HSE next month, will have to be opened on a phased basis.

The new facility will replace the current Central Mental Hospital in Dundrum in south Dublin.

The PNA called for the proceeds from the sale of valuable lands at the Dundrum site to be ringfenced for mental health services after the hospital closes.

Mr Hughes said a conciliation process was under way at the Workplace Relations Commission regarding key elements involved in the opening of the new centre at Portrane, including staffing, skill mix, rosters and other issues.

He expected the 120-bed forensic hospital would open towards the end of March/April 2021.

Mr Hughes strongly criticised a 1 per cent reduction in the share of the overall health budget being allocated to mental health next year.

“This is outrageous and clearly highlights the lack of understanding of our politicians of the inadequacy of our current services or the extent of the growing demands for mental health services at every level.

“Reducing the budget by 1 per cent is incomprehensible and a retrograde step, especially when it comes just four months after the launch of the latest 10-year Government [mental health] strategy ‘Sharing the Vision’.”

Mr Hughes told the conference that the Government “must address the deficits in the provision of mental health and prepare as a matter of urgency for the impending sharp rise in demand for services in the same manner that the Covid crisis has led to a build-up of capacity in the intensive care units and general hospital services”.

Mr Hughes said that the State continued to have the third lowest number of psychiatric beds per 100,000 population in the EU, with only Cyprus and Italy having fewer.

He said that one of the many knock-on effects of this was “the high proportion . . . of people with a serious mental illness in prison”.

Mr Hughes said the PNA’s campaign to have its ambulance branch, Nasra, recognised by the HSE as an official representative body for paramedics, advanced paramedics and emergency medical technicians – which has already led to eight separate work stoppages – would continue. However, its industrial action has been suspended due to the Covid crisis.

“On a daily basis they are selflessly putting their own health and that of their families at risk in the interest of the wider community, yet they continue to be denied the fundamental right to be represented by the union of their choice,” he said.

“That injustice was forcefully demonstrated at the height of the Covid-19 pandemic when PNA had to warn the HSE that our ambulance personnel members were being ignored and bypassed in the circulation of important Covid-19 information and protocols which were being distributed to other union members throughout the country.”

Mr Donnelly said he was “resolved to progress the various commitments for mental health contained in the new Programme for Government”. He said this was reflected in a Budget 2021 provision of more than €1 billion, which included an increase of €50 million over 2020.

He also said that new mental health legislation which was being finalised in the Department of Health would “promote a multi-disciplinary approach to the care and treatment of patients in approved centres, and it will encourage the patient to be an active participant in their care”.