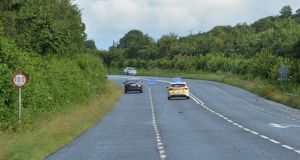 It is “irresponsible” of governments not to develop proper systems of trauma care when upgrading road systems, says Prof Mark Fitzgerald, a trauma expert from the Alfred Hospital in Australia. Photograph: Alan Betson

Road users should be taxed to pay for the care of people killed and injured in traffic incidents, a conference on serious trauma injuries will hear on Friday.

One life a week could be saved through the creation of an integrated trauma service, with two people spared life-long serious injury, the conference in the Mater hospital will be told.

Ireland needs to move as soon as possible on plans to create a trauma service so that lives can be saved, according to Prof Mark Fitzgerald, a leading trauma expert from the Alfred Hospital in Australia.

It is “irresponsible” of governments not to develop proper systems of trauma care when upgrading road systems, says Prof Fitzgerald, who oversaw the introduction of a major trauma network in the state of Victoria.

In Victoria, a transport accident charge levied on motorists is used to fund accident prevention and to support those injured on the roads.

Within five years of the introduction of a trauma network, deaths were halved and there was no increase in the number of patients requiring long-term care. Similar reforms in London saw a 30 per cent fall in deaths.

Prof Fitzgerald says Ireland could achieve similar levels of improvement by acting on initial plans approved by Cabinet last year, but not yet acted upon.

This would see the establishment of two national trauma centres, one in Cork University Hospital and one in a Dublin hospital, and a network of smaller trauma units across the State. The Mater is among a number of hospitals in the capital seeking to be designated a trauma centre; a decision is due in the autumn.

Every year in Ireland, there are about 1,600 major traumas. Most occur in the home, often involving low falls, but 60 per cent of multiorgan injuries are associated with road incidents. One per cent of patients have penetrating wounds caused by knives or gunshot.

Prof Fitzgerald says proper trauma care means “integrating care to ensure there are no gaps in the chain of survival”.

“It’s about getting the right care to the patient within the right time, delivered by teams of surgeons working 24/7 working to pre-arranged systems and protocols that take human error out of the situation.”

At present, only one in 12 seriously injured patients arriving in Irish hospitals is received by a specialist consultant, he points out.

So far this year, 69 people have died on Irish roads, compared to 60 last year, according to Garda figures.