Hundreds of women take part in skinny dip against cancer

Women of all ages participate in this year’s Strip and Dip charity swim in Co Wicklow. 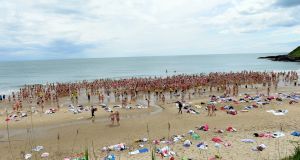 About 1,800 women have stripped off on a beach in Co Wicklow to help the fight against cancer.

The mass skinny dip included women of all ages – from teenagers to pensioners – and was for the Strip and Dip charity swim.

Participants stripped down on the secluded Magheramore beach for the event.

Cancer survivors stood with women who still had the disease, while sisters, cousins, friends and work colleagues also joined in.

Now in its seventh year, the charity swim has raised more than €700,000 in total.

Jackie Kavanagh, who has cancer, left her hospital bed on Saturday morning to take part in the mass skinny dip.

“I was admitted to hospital yesterday and have to go for an operation next week,” she said.

“I got out today as the girls had it planned, as it’s a great cause.

“A friend of ours has also been diagnosed with cancer, so we’re all here to raise awareness of the disease and show that everyone is different.

“I’ve scars, I was opened up back and front.”

Niamh Brennan, from Dunboyne in Co Meath, was joined by her sisters and friends for the swim.

Her mother Kathleen died in 2010, years after she was diagnosed with ovarian cancer.

“My mam had ovarian cancer for seven years. She ended up with bowel cancer and she had enough and said goodbye,” Ms Brennan said.

“We decided to do this as it’s a great way of celebrating her life.

“It’s a great day out for all the girls. This is our second year going out. It’s a great sense of freedom. It brings life to it all and gives us some girl power.”

Tanya Dobbyn (26) was diagnosed with cancer two years ago.

The Waterford woman underwent six months of chemotherapy and had a double mastectomy.

She said: “I was diagnosed with stage three breast cancer when I was 24. It was a huge shock but I’ve finished my treatment and feel great.

“My mam and aunt have been diagnosed with cancer, so it’s been a rollercoaster. But I’ve had great support.”

Her friend Becky Costello said: “As women we want to stand by each other in solidarity.

“We need to bring attention to this huge cause. It’s not all about getting naked, it’s about raising money for a hugely important cause.

“There’s a tribe feeling. People are feeling a little bit awkward and giddy, but we are all the same.

“People of all ages are here, cancer doesn’t discriminate.”

Bernie Murray, from Bray, was diagnosed with breast cancer in 2005.

“I thought my world was over. I had a 13-year-old daughter and was a single parent,” she said.

“But with the help and support of friends and family, I got through it.

“This is my second year doing it [the swim] and it makes me feel empowered.

“Anyone that is suffering – keep fighting.”

Orla Farrelly was joined by her mother and aunts for the swim, after her grandmother died within six months of being diagnosed with pancreatic cancer.

“She was a wonderful woman who was the bond that kept our family all together.

“We are delighted to do this in memory of her.” – PA