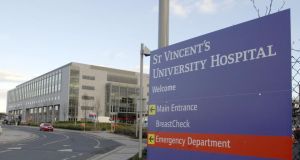 A file image of the St Vincent’s public hospital, in Dublin. Photograph: The Irish Times.

St Vincent’s Private Hospital in south Dublin has a parasitic dependence on the adjacent State-funded public hospital, the head of the HSE has said.

Tony O’Brien told the Dáil Public Accounts Committee the HSE believed 56 per cent of consultants admitting patients to St Vincent’s Private Hospital did not have contractual rights to do so.

Both the public and private hospitals form part of the overall St Vincent’s healthcare group.

Mr O’Brien said the HSE had not received full disclosure from the group on the issue.

He said it was citing “spurious” grounds of data protection.

He said there were concerns the private hospital was being run off the back of St Vincent’s public hospital which received €206 million in State funding.

He suggested it was coming close to the stage where the HSE could not accept the situation any more.

Mr O’Brien indicated the issue of special administration for the hospital may have to be considered.

He said this was notwithstanding clear commitments made previously by the group that it would “swing around into compliance”.

Mr O’Brien said the former chairman of the group, who gave the undertaking, had made some important progress “before his removal from office by the group’s shareholders”.