Smokers should not rely on e-cigarettes to quit, says health body

HSE spends more than €240m a year on smoking-related diseases 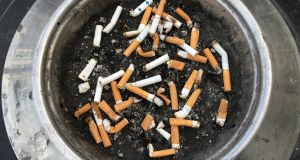 Hiqa has recommended the Minister for Health await the results of trials on the long-term effects of e-cigarettes before advocating their use to end smoking habits. Photograph: Bryan O’Brien

Smokers should not rely on e-cigarettes to give up the habit due to a lack of evidence that they effectively help people to quit, the Health and Information and Quality Authority (Hiqa) has said.

In its first analysis of the cost-effectiveness of using e-cigarettes to help people quit smoking, Hiqa said the Minister for Health should invest further funds in interventions to help the approximately 820,000 Irish smokers break the habit.

The health body also recommended that the Minister await the results of ongoing trials on the long-term effects of e-cigarettes before advocating their use as a means of ending smoking habits.

The HSE spends €460 million a year on dealing with the consequences of smoking, including lung cancer, respiratory diseases and cardiovascular diseases such as heart attacks and strokes, according to Hiqa.

Patients with these smoking-related health issues account for about 28,000 hospital admissions and some 11,000 day cases per annum.

One in five deaths in Ireland every year is due to tobacco smoke and the State spends more than €40 million annually encouraging smokers to quit. Half of the State’s smokers make at least one yearly attempt to quit, according to the latest research.

However, the assessment also found that while almost one in three people in Ireland use e-cigarettes in their attempt to end the habit, there was not enough evidence to “reliably demonstrate” their effectiveness in helping smokers quit.

Hiqa said the HSE should increase the uptake of varenicline, taken either alone or in combination with nicotine patches, among smokers who choose to use pharmacological support in their attempt to quit.

Dr Ryan recommended that smokers use varenicline along with nicotine patches, saying a combination of the two was 3½ times more effective than using no active medication to end the habit.

She added that a widespread uptake of this new combination of interventions would need to be considered as “part of the development of clinical practice guidelines and national health policy”.

Dr Ryan recommended that the Minister for Health consider the long-term safety of e-cigarettes use and concerns that the social normalisation of e-cigarettes could lead to “an increased uptake among people who have never smoked, or later migration to tobacco cigarettes” before advocating e-cigarettes as a means of quitting.

The Hiqa report found that counselling and group therapy were also effective in helping smokers to quit, adding that pharmacological therapies were “not acceptable for everyone”. The research also found pregnant women who smoke should be offered psychosocial intervention in the first instance.

The Irish Cancer Society welcomed the research, saying increasing funding for smoking cessation would reduce the tobacco-related disease burden on the State’s health services and prevent thousands of preventable deaths in the future.

“There is no long-term evidence as to the safety of these products, and there is emerging, but as of yet limited, evidence that for adolescents e-cigarettes may act as a ‘gateway’ to tobacco usage, especially among those in their late teens who otherwise, according to research, did not intend to smoke tobacco.”

Minister of State for Health Promotion Marcella Corcoran Kennedy said the research would provide evidence for the development of national clinical guidelines on smoking cessation interventions and highlighted the importance of providing psychological support for pregnant mothers struggling to quit.

“When a smoker successfully quits, the smoker wins, their family and friends win, their community wins and the health services win.”