‘Slight recovery’ in number of people referred with suspected cancers 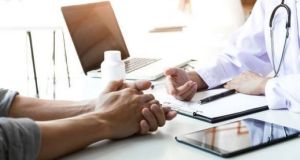 “We have been assured by the Minister for Health and the HSE that urgent treatment is continuing despite the coronavirus pandemic,” an Irish Cancer Society spokeswoman said. Photograph: Getty Images

There was a “slight recovery” in the number of people being referred with suspected breast, lung, prostate and skin cancer last week, the HSE has said. It comes after weekly electronic referrals dropped by more than half following the introduction of Covid-19 restriction measures.

Electronic referrals from clinics fell by 57 per cent between January 6th and March 15th and March 16th and April 19th. Suspected cases of skin cancer saw the largest drop (71 per cent), followed by lung cancer (61 per cent), breast cancer (55 per cent) and prostate cancer (50 per cent).

“Looking at the referral data week by wee there has been a slight recovery in the number of people being referred in this past week [April 20-26th],” the HSE said.

The HSE has been monitoring the change in referrals with suspected cancer symptoms with the assistance of data from Healthlink, a messaging system that GPs use to send electronic referrals. While the system is not used for every referral “it is useful to show the recent trends”, the HSE said.

It said there has been a “concerted effort” to encourage the public to continue to contact their GP with non-Covid related symptoms, including those of possible cancer.

The HSE said the situation was under review, and that the programmes would be restarted “when it is deemed safe to do so”.

Changes to cancer patients’ care are being made on an individual basis, according to the Irish Cancer Society. “We have been assured by the Minister for Health and the HSE that urgent treatment is continuing despite the coronavirus pandemic,” a spokeswoman said.

The charity said it was “concerned” about the falloff in people attending their GP for non-Covid related reasons, “including concerns over potential cancer symptoms”.

Dr Deirdre O’Mahony, consultant medical oncologist at Bon Secours Hospital in Cork and president of the Irish Society of Medical Oncology, said the pausing of screening services was “something that we are all very much worried about”.

“The Irish Society of Medical Oncologists meets with the NCCP [National Cancer Control Programme] via teleconference on a once-weekly basis since this all started. While our immediate concerns were to do with how can we manage the established patients, in more recent weeks there’s been a focus on how are we going to manage the patients that are missed, not missed I suppose but just by virtue of non-presentation – where they are going to present and when are they going to present.

“I do believe that unless we have diagnoses and screening and the abilities to pick up these cancers in a time-sensitive manner established, we’re going to see patients who will ultimately present with a more advanced disease which could significantly impact on their long-term outcome.”

Prof John Crown, consultant medical oncologist at St Vincent’s Hospital, said if services were to return to “some degree of normality” over the next two to three months there would be “hopefully a relatively limited number of patients who will have suffered in a big way because of a delayed diagnosis of one or two month”.

“We’re already dealing with a hospital system that has the longest waiting lists in Europe, our waiting lists are appalling, and then factor into that two months of inactivity causing huge bottlenecks.”

Dr Seamus O’Reilly, consultant medical oncologist at Cork University Hospital, said there needed to be “a gradual unwinding of services” and systems were currently being adjusted to “deal with the fact that Covid is going to be here for some time”.

“We’re likely to see more virtual clinics in the future. This is more difficult, especially for new patients, because of the nuances of care and the body language of someone during a physical assessment.”