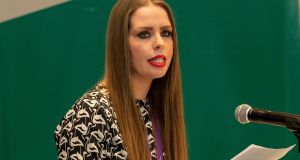 Dr Heather Burns, deputy chief medical officer, noted that the 14-day incidence rate of infection had surpassed 300 for the first time - now at 302 as compared to just three at the end of June. Photograph: Collins

Nursing homes cannot be protected from Covid-19 outbreaks unless the public comes together to bring down rising levels of community transmissions, Chief Medical Officer Dr Tony Holohan has warned.

There are now 33 outbreaks with 451 linked cases but the team stressed that only a national response to the resurgence of the virus would help bring the numbers down.

“The extent that this virus is transmitting in the way that it is in the community, this represents a risk to all of those settings,” Dr Holohan said.

“So long as we retain high transmission in the community as we have at the moment it will be impossible for us to give full protection to nursing homes,” even where protective measures have been put in place.

Dr Colm Henry, chief clinical officer of the HSE said 132 nursing homes were currently receiving some sort of support, including 35 receiving “extensive support”, such as that from Covid response teams.

On Thursday, a further 1,066 cases of the virus were confirmed, bringing the total in the State to 54,476. Three additional deaths brought the mortality total to 1,871.

As Ireland entered into Level 5 Covid restrictions, Dr Holohan said they are concerned about public buy-in to the increased demands on limited movement and behaviour.

“It is not surprising that people would find another ask to do all of this all over again a hugely difficult challenge,” he said.

“I’m not going to get into predicting failure; I am going to be expressing optimism that we can do this.”

However, while the Nphet target is to reduce daily case rates to 100 by December, from the current level of about 1,000 to 1,200, the data presented on Thursday illustrated the stark trajectory of the virus.

Dr Heather Burns, a deputy chief medical officer, noted that the 14-day incidence rate of infection had surpassed 300 for the first time - now at 302 as compared to just three at the end of June.

“The risk to you being exposed to Covid-19 is now 100 times greater than it was four months ago,” she said.

The “R number”, indicating the reproductive level of the virus, is currently between 1.3 and 1.4, with ambitions to see it fall to 0.5 following the latest round of social restrictions.

For every 1,000 positive cases in the 45 and under age group, 12 are hospitalised and one is admitted to intensive care. However, for those aged 65 and over, those figures jump dramatically to 180 and 30 respectively. While deaths in the former age group are deemed “rare” by Nphet, there are about 30 in the latter group.

Setting out the data, Professor Philip Nolan, chair of the Nphet Irish Epidemiological Modelling Advisory Group, showed an exponential rise in case numbers of between 5 and 8 per cent per day.

Hospitalisation rates are similarly growing, by about 5 per cent per day, and intensive care admissions by 3 per cent.

Although the disease remains largely focused in the 19 to 24 age group, cases are now rising in the over 65s and in nursing homes.

Because of earlier measures introduced in Dublin, the patterns there have been monitored closely.

“Unfortunately, one of the lessons from Dublin is that where the rate of growth of disease slowed at the point that Level 3 measures were introduced within about 14 days it began to rise again . . . as quickly as the rest of the country,” Prof Nolan said.

Dr Holohan was asked about concerns regarding the contact tracing system and its ability to keep pace, but he said the most important focus now was not tracing but the public response to Level 5 measures and their ability to slow community transmission.

“We have a much, much greater challenge now in terms of the level of community transmission that is in the population . . . and that is spreading in places that we haven’t been able to identify,” he said.

“We won’t contact trace our way out of this; we have to take other measures as a society.”