Section of Bill on suicide risk will be most closely parsed 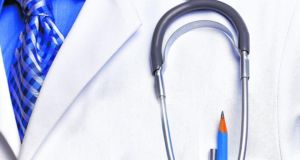 The group of three doctors who will make an assessment of suicide ideation will comprise an obstetrician and two psychiatrists.

What strikes the reader first is the title. Gone is the ‘Protection of Maternal Life Bill’ mentioned on the Government’s legislative schedule earlier this year. In its place, the “Protection of Life during Pregnancy Bill”.

If that has the look of a late touch aimed at making the draft law more palatable to critics, however, much of the abortion Bill published late last night will look familiar to anyone who has followed the long, tortuous debate that began with the Supreme Court’s decision in the X case more than 20 years ago.

The Bill spells out how the State proposes to take account of what the Supreme Court ruled in its landmark 1992 ruling: that a pregnant woman has a right to an abortion if there is a real and substantial risk to her life because of pregnancy, including the risk of suicide.

The procedures for assessing that risk differ depending on the woman’s condition. Under the terms of the draft legislation, one doctor will be able to make a decision on whether to terminate a pregnancy in an emergency situation in which a mother’s life is in danger.

Where there is risk of loss of a woman’s life from physical illness - but where the situation is not an emergency and suicide intent is not a factor - two doctors will be entitled to make the decision.

But it’s the section headed “Risk of loss of life from self-destruction” that will be parsed most closely this morning. In cases of suicide intent, the procedures are tighter than in other scenarios, but not as restrictive as suggested by media leaks of an early draft of the Bill.

According to media reports last week, the initial draft Bill set out a “suicide test” that would have taken place over three stages. First, a suicidal woman would have been interviewed by three doctors. Their decision would then have been reviewed by another three doctors. Finally, in the event that the pregnant woman was not granted an abortion, she could have appealed to a panel comprising six further doctors.

The Bill published last night in effect removes the second stage. It retains an appeal procedure which can be initiated by a woman whose request for an abortion has been rejected, though this is called a “review” and will be conducted by three doctors, not six. In both the assessment and the appeal, the decision of the three doctors must be unanimous.

The group of three doctors who will make an assessment of suicide ideation will comprise an obstetrician and two psychiatrists. They must “jointly certify in good faith” that (a) there is a “real and substantial risk” of the loss of the pregnant woman’s life by way of suicide and (b) “in their reasonable opinion” this risk can be averted only by termination.

The Bill adds that at least one of the three doctors should “consult with the pregnant woman’s general practitioner where practicable”.

As the explanatory note elaborates, this definition is intended to “place a duty on certifying medical practitioners to preserve the life of the unborn as far as practicable”.

The Bill does not specify that the three doctors examine the woman together or that they examine her at the same location. “It is expected that a decision would be reached following a multidisciplinary discussion in accordance with medical best practice,” according to an explanatory note.

A noteworthy aspect of the heads published last night is a stipulation that Government be kept closely informed on how - and how often - the provisions are being used in Irish hospitals. The document states that detailed information on each termination carried out under the Bill must be sent to the Minister for Health, including location, grounds for termination, names of medical practitioners involved and gestation.

This information is required “to inform policy as well as to ensure that the principles and requirements of the system are being upheld”, a note explains, adding that it is “not intended” that the Freedom of Information Act will apply to these records.

Moreover, the heads impose on the Health Service Executive a “duty” to report to the Minister for Health annually on the workings of the review, or appeals, process.

On conscientious objection, the heads state that nothing in the Bill shall be construed as obliging any doctor, nurse or midwife to carry out, or to assist in carrying out, a lawful termination of pregnancy. However, the document adds that “no institution, organisation or third party shall refuse to provide a lawful termination of pregnancy to a woman on grounds of conscientious objection”.

In other words, in the event of a doctor or other health professional having a difficulty in undertaking a required medical procedure, he or she will have a duty to ensure that another colleague take over the care of the patient, as per current medical ethics.

Finally, the heads affirm a general ban on abortion in Ireland in clear terms: “It shall be an offence for a person to do any act with the intent to destroy unborn human life.”

It sets out a penalty of up to 14 years in prison and/or a fine for anyone who intentionally performs or effects an abortion, adding that the penalty may apply to the pregnant woman.