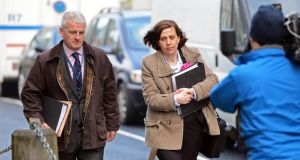 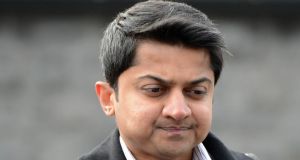 Praveen Halappanavar arrives at the inquest into the death of his wife Savita in Galway this morning. Photograph: Eric Luke/The Irish Times

Savita Halappanavar’s consultant obstetrician has told the inquest into her death there were a number of systems failures at Galway University Hospital in her treatment.

Dr Katherine Astbury agreed with coroner Dr Ciaran McLoughlin there were systems failure at the hospital in relation to the monitoring of Ms Halappanavar and the processing of blood tests.

Asked about her decision to refuse Ms Halappanavar’s request for a termination, she said that under Irish law there had to be a “real and substantial risk” to the life of the patient before this could happen.

At the time of the request, Ms Halappanavar was well and a termination was not permitted because of a diagnosis of poor foetal prognosis.

Dr McLoughlin urged the witness to get away from the “emotive term” of termination, which evoked the killing of the foetus. This was not the intention of the Halappanavars, he said. Dr Astbury said that if a patient was given medication to deliver at the time when there was a foetal heartbeat, her understanding was that this was a termination.

Dr McLoughlin quoted from Medical Council guidelines on obstetric complications, which state that it may be necessary to intervene to protect the life of the mother while making every effort to save the baby’s life.

Asked if she felt she had scope to intervene under these guidelines, the witness said she didn’t believe she could. Her understanding was that these guidelines applied to situation where a mother had been diagnosed with cancer or another life-threatening illness not related to her pregnancy. In that situation, intervention would be justified, Dr Astbury said. The issue was that there was no law to tell someone what was permitted or not. It was a question of law.

Dr Astbury said she was not aware of the results of blood tests conducted four days after Ms Halappanavar was admitted, where her condition was deteriorating. If she had been aware of the result, she would have seen her soon. At the time, she didn’t have the blood result and was working only on clinical signs. There was no evidence to suggest she had severe sepsis.

“If we had the blood results back sooner we may have considered intervening sooner,” she said.

The inquest into her death heard a claim by a staff midwife yesterday that additions to the record were made by the hospital’s internal investigation. Coroner Dr Ciaran McLoughlin sought clarification.

Declan Buckley SC, for the hospital, said this morning that it hadn’t been possible to identify who made the additional marks on the document, which he described as a “bracket” or “squiggle”.

However, he said the marks could not have been made my internal investigation as it started its investigation weeks after the document had been photocopied and put in a safe.

He emphasised that the marks hadn’t interfered with anything that had been written on the document, and speculated that they could have been added during review when Ms Halappanavar was moved to intensive care last October.

Dr McLoughlin said he accepted this.