Right to travel to North for treatment must be protected, says MEP 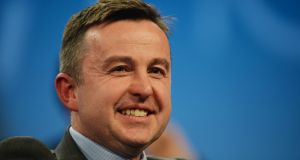 The Government needs to ensure that Irish citizens can continue to receive medical treatment in Northern Ireland after the United Kingdom leaves the EU, according to Fine Gael MEP Brian Hayes.

Forty per cent of Irish people who availed of treatment under the EU cross-border healthcare directive did so in Northern Ireland, according to new figures released to Mr Hayes.

This shows the Government must ensure this EU right is protected for Irish citizens post-Brexit, he said.

The directive covers the cost of treatment in another EU member state and can be used where a patient is stuck on a lengthy waiting list. However, it does not cover the cost of travel.

As a result, treatment in Northern Ireland is “really the only cost-effective option,” Mr Hayes said, and Ireland is at a significant disadvantage to other EU countries such as France, where patients can travel easily to Belgium, the Netherlands or Germany.

Demand for the scheme is growing, with the number of applications increasing from 995 in 2015 to 1,738 in 2016. Patients foot the cost of treatment abroad themselves and are later reimbursed by the HSE.