Picketing cook ‘up at 4am’ to make patients’ strike rations

‘Just give us what is owed to us. It’s a very responsible job,’ says Limerick hospital employee 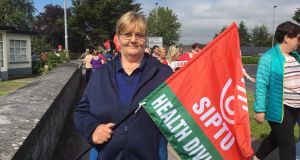 There was no rest for Joan Costelloe, a cook employed at University Hospital Limerick, who awoke before dawn to prepare “special meals”, for patients unable to eat or swallow hard food.

Later, having joined her Siptu represented co-workers on the union picket line outside the hospital, she said: “I’m up since 4am to get in here to feed those patients.

“The (special meals) list I got this morning included renal/dialysis, coeliacs, low fats, dairy-free, and then you have the purées, mince moist, and soft meals, as well.”

“All in all, I suppose I did, maybe about 40 dinners or salads this morning, to the best of my ability. Not all were puréed. With coeliacs you cant give them flour, and puréed patients (meals) had to be prepared separate.”

Work conditions in the kitchens are “hectic” nowadays, she says. “We’ve taken on an awful lot of work in the last couple of years and we are not recognised for what we are doing.”

Costelloe, who has worked for the last 23 years in the Limerick hospital’s catering section says her work is directly linked to patient safety as she prepares meals for patients with serious and complicated dietary needs.

It’s potentially “very dangerous” as she and her colleagues who are based in the hospital’s “main kitchen” are tasked with making “special diets for people who can’t swallow or eat properly so, we have that responsibility”.

“It’s a dangerous duty — you can’t have a little piece (of food) because (the patient) could choke,” she explains.

Calling for the increased pay she says she was promised by the Government in 2015, Costelloe believes she should be rewarded for “a very responsible job”.

“All patients in the hospital, when you are in the kitchen, when you’re cooking meals, their lives are in your hands, because you have to be very careful what you are (serving) up to them,” she adds.

Her message to the Government is: “Just give us what is owed to us. We deserve it.”

Today’s menu at UHL, for the majority of patients on wards, included soup and sandwiches. Efforts were also underway to provide a “beef stew”.

According to Siptu, about 800 workers were involved in Tuesday’s strike at UHL.

A spokesman for the hospital said due to “limited catering services”, senior managers at the hospital were putting their shoulder to the wheel helping to serve up meals to patients.

“Regrettably many patients will be served soup/sandwiches/salads rather than a full meal service. Special arrangements are in place for patients with specific dietary requirements,” the spokesman added.