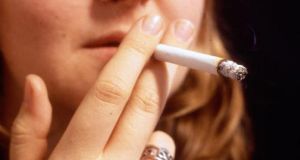 Women smokers have a significantly higher increased risk compared to men, according to new research.

Women smokers have a significantly higher increased risk compared to men, according to new research in the UK.

The findings, led by Sheffield Teaching Hospitals NHS Foundation Trust in partnership with the University of Sheffield, identified that the increased risk was especially true in the case of women under 50.

The results, published in the Journal of the American College of Cardiology, showed that despite the increased risk, smokers can reduce their risk to that of someone who has never smoked in as little as a month after quitting.

Heart disease is the number one cause of death for women and men worldwide, and acute ST Segment Elevation Myocardial Infarction (STEMI) is among the most life-threatening forms of heart disease.

STEMI, sometimes called a major heart attack, is caused by a complete blockage of one of the main coronary arteries. Smoking is a risk factor for heart disease and researchers have identified smoking as the cause of STEMI in nearly half of cases.

The researchers found that smoking increases STEMI risk in all patients, regardless of age or gender, but the risk is higher in women compared to men at all ages.

The largest relative risk difference between men and women smokers was in the 50-64 years group, but the highest risk increase in both genders was in the 18-49 years group – the youngest group.

Female smokers in this group had a greater than 13 times higher risk of STEMI compared to their non-smoking female contemporaries. Young male smokers had an 8.6 times increased risk.

Separately, a study by Dr Sandra Sogaard Tottenborg on “prenatal exposure to paternal smoking and semen quality in the adult offspring” was presented at the 35th annual meeting of the European Society of Human Reproduction and Embryology on Tuesday.

The study showed that smoking by a father during a pregnancy that gave rise to his son is also associated with a non-significant but slightly adverse effect on his son’s sperm count, albeit of smaller magnitude than that found if the mother smoked.

Prof Richard Sharpe of the MRC Centre for Reproductive Health at the University of Edinburgh said the research “may be yet another brick in the wall showing the harmful effects of passive smoking”.

Prof Allan Pacey of the University of Sheffield said it was “an interesting study which highlights a small but potential link between a man’s sperm quality and the lifestyle of his parents”.

“We now know that many aspects of adult health, including fertility, are established very early in life before we are born,” he said.

“In this study, a small but non-significant effect is seen on the sperm quality of sons born to partnerships where the father smoked but the mother didn’t.

“The authors conclude that this could be because the fathers’ smoking [caused] genetic changes in his sperm that were then passed onto his son.

“This may be true. But I do wonder if it [is] simply a case of passive smoking by the mother as presumably the fathers and mothers of these males shared a common household?

“However, regardless of the precise biological effect, the data does serve to illustrate the need for both future fathers and mothers to be as healthy as possible, both before and during a pregnancy.”