Pharmacist struck off over benzodiazepines disappearance 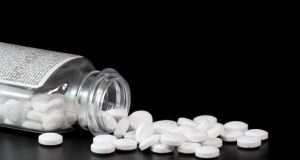 Michael Keenan (41), of Valu Plus pharmacy in Cavan Town, did not contest charges against him at a hearing of the Pharmaceutical Society of Ireland on Wednesday. The pharmacist was found responsible for the disappearance of more than 17,000 benzodiazepine pills and is to be struck off the register. File photograph: Getty Images

A pharmacist responsible for the disappearance of more than 17,000 benzodiazepine pills has been found guilty of professional misconduct and is to be struck off the register.

Michael Keenan (41), of Valu Plus pharmacy in Cavan Town, did not contest the charges against him at a hearing of the Pharmaceutical Society of Ireland (PSI) on Wednesday.

He is the first pharmacist to be struck off the register since new legislation in 2007 allowed for fitness-to-practise inquiries to be held in public.

Kieran Brennan, the owner of Valu Plus, submitted a complaint to the PSI about Mr Keenan in July 2012. The PSI went to the High Court on August 8th, 2012, and secured the suspension of Mr Keenan before launching an investigation.

Sinead O’Keefe and Liz Kielty, authorised officers with the PSI, examined records, invoices and registers at the pharmacy to identify discrepancies between what drugs were being received and dispensed by the pharmacy.

Benzodiazepines are sedatives that are prescribed to reduce anxiety or stress, encourage sleep or to relax muscles. They are sometimes used to ease the “comedown” from stimulant drugs such as ecstasy and cocaine.

Mr Keenan was additionally found guilty of professional misconduct for his failure to keep a proper record or register in relation to the dispensing of methadone, which is primarily used to combat heroin addiction.

He was also found guilty of the lesser charge of poor professional performance for his failure to comply with standard operating procedures.

Ronan Quirke, the chair of the PSI professional conduct committee, said that “in the interest of public safety and having regard to the gravity of professional misconduct”, it was directing Mr Keenan’s registration be cancelled.

University College Cork professor of clinical pharmacy practice Stephen Byrne, who was called to give evidence as an expert witness, said the pills were “hypnotic, addictive and could be abused”.

“Typically you would dispense one box, or two at a maximum, and prescribe one tablet at night, or patients who have been on it for a long time might be prescribed two tablets at night,” he said.

He said that on the assumption the assertions in relation to Mr Keenan were proven, they amounted to professional misconduct “given the seriousness in terms of the medicines and quantities”, which he described as “extremely high”.

In terms of the charge in relation to a methadone register, Prof Byrne said the drug was “an addictive medicine - an opiate - that can be abused from time to time”. The lack of proper records, which he described as “alarming”, could lead to “patient safety issues”.

The practice of proper record-keeping was not a new requirement, he said, and failure to keep such records was a breach of legislative requirements as well as the code of conduct for pharmacists.

At the beginning of the hearing, Mark Ryan of Whitney Moore Solicitors, for Mr Keenan, said his client was pleading guilty to the charges, which would normally lead to a curtailment of the hearing. Eugene Gleeson SC, the legal assessor, however said it was important it still go ahead.

“I think it’s important the public knows and understands precisely what this inquiry is all about,” he said.